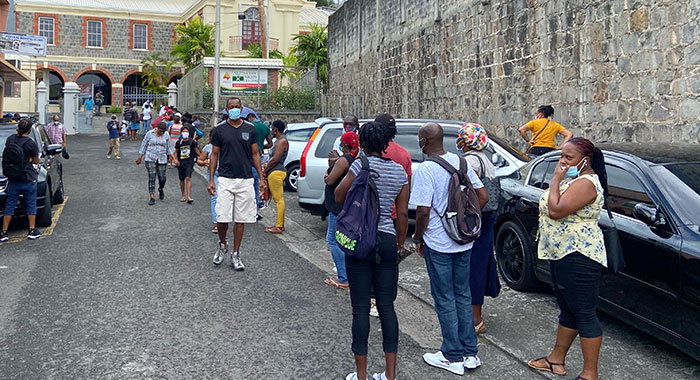 A former permanent secretary in the Ministry of Health is questioning whether there is any difference between the law mandating the wearing of face masks in certain places and what obtained before there was no law.

Lanceford Weekes voiced his concern during an interaction with Prime Minister Ralph Gonsalves on WE FM on Sunday.

The statutory rules and orders that came into effect on Sunday impose an EC$100 ticket for not wearing a mask in a public place or a place to which the public has access.

However, the rules do not apply to persons queuing up outside a public place to access a service provided inside that particular place.

For instance, while under the law, a bank is considered to be a public place and, therefore, a person must wear a mask inside the bank, that same person can choose not to wear a mask while queuing up outside to access the services provided inside the bank.

“That has not been dealt with in these regulations, so the guidelines will apply,” Gonsalves said. “We could devise regulations for it but it becomes a little more problematic.”

The guidelines suggest that persons stand six feet apart and wear a face mask to help to contain the spread of COVID-19.

However, there is no legal sanction for persons who fail to do so outside of a “public place”, as defined in the regulations.

The prime minister said that he had noticed that “most of the places around town, like banks and so on, they have marks outside where you’re supposed to line up in a particular manner and they say you must wear the mask.

“If it turns out that that is an area where we have problems, we can always go and extend the rules.”

But Weekes told Gonsalves that the rules that his government passed and which came into effect on Saturday, will not be significantly different from what obtained before.

“Because effectively, the institutions, the establishments, themselves have been making it mandatory,” Weekes said.

Many places have been making it mandatory for persons to wear a face mask in order to enter the establishment.

And even where some persons might have threatened to sue if denied entry to or service at a particular establishment because they were not wearing a face  mask, Gonsalves, who is a lawyer, had said that any such lawsuit would fail.

“Except to say this: the Chamber of Industry and Commerce had a meeting with the chief medical officer and the medical officer of health and their team and they had written a letter also to me, saying they would like for inside of their buildings, if we can have the regulations put in place, because when they tell people, people say, ‘Wha’ yo’ talking to me ‘bout?’ and then put the onus on them to have to put them out or stop them from coming in. Now, they know that there is a rule and there would be a fine.”

But Weekes said, “But on the other hand, Prime Minister, the same people are outside pushing each other down to get inside.”

“Yes, that’s not covered in these rules but one would expect that if you are going inside a bank, you are going to have on your mask because from the time you enter the door, if you don’t have it, is a fine; is a ticket.

“And usually the security helps to take care of this particular problem but if it is one which is considered to be one which ought to be regulated, we will also do so. But this particular set of regulations were done on the basis of the recommendation of people from the Chamber of Industry and Commerce and the analysis done by the medical officer of health and the chief medical officer.”

Under the rules, a person who violates the mask-wearing or indoor dining rules, or who rides in or drives a public service vehicle without wearing a mask will be issued an EC$100 ticket for each of those offences.

A similar fine will be imposed for the driver of a public service vehicle in which more than 50% of the licensed number of passengers travel.

The rules also imposes an EC$500 fine on persons who violate the mass gathering limitations.

There is no alternative prison sentence for failing to pay the fine, which would be treated as a civil debt to the Crown.

Under the rules, a public place is defined as an indoor area, whether publicly or privately owned, to which the public has access by right or invitation expressed or implied, whether by payment of money or not, but does not include a daycare, or pre-school.

“So you are encouraged to wear your mask on the road, but it is not mandatory. It’s really to indoor areas. Public places — places to which the public has access if it is a private place or it is somewhere which is publicly owned, obviously meaning all the various business places, government offices and the like, which is happening more or less already.”

He further noted that wearing of the mask means ‘fitted to his face so as to cover his nose, mouth and chin. And where a person under the rule is a child accompanied by a person who has responsibility for the child, the person shall provide and ensure that the child has and wears a mask in a manner required by the rule”.