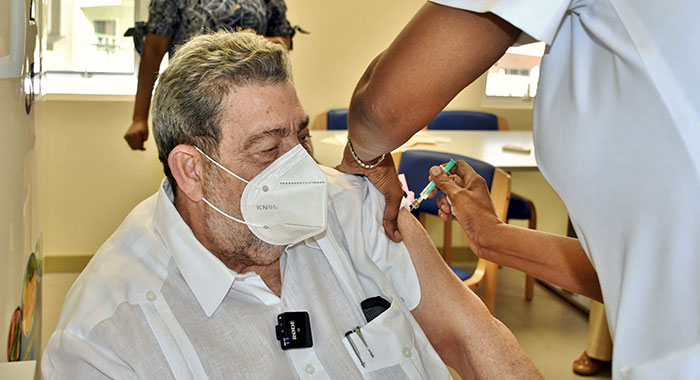 Prime Minister Ralph Gonsalves receives a COVID-19 jab from a nurse, who is not wearing gloves. (Photo: Lance Neverson/Facebook)

Prime Minister Ralph Gonsalves has responded to persons who criticised a nurse who gave him and his wife, Eloise, COVID-19 vaccine without using gloves.

He made the point on Thursday at a Ministry of Health press conference, where he called for a cessation of “this constant attack” on chief medical officer, Dr. Simone Keizer-Beache, Medical Officer of Health Dr. Roger Duncan, and other health officials.

“I am urging persons not to go about unnecessarily creating dissension about nothing,” the prime minister said.

Netizens, including some claiming to be health professionals, have described the nurse’s action as unacceptable.

On the other hand, other persons have posed video and photos from around the world, including the United Kingdom and Barbados, of healthcare workers administering vaccines without wearing gloves.

“I mean — and persons who don’t know how to do these things, they sit down in front of a computer, they’re on telephone and call and it makes no sense this sort of nit-picking. In fact, it has reached a stage now that I am completely immunised against it because you just don’t pay any mind because some of it has become so senseless.

“And some of the bickering is really unseemly and we must stop it and just let us do the right things as we have determined on the basis of the advice of the health professionals.

Some persons also commended on the fact that the nurse also appeared to be wearing a cloth mask, rather than a surgical mask.

Gonsalves and his wife were among persons who volunteered to receive jabs from among 20 doses of the Russia-developed Sputnik vaccine.

Last week Thursday, the prime minister told Parliament that he was in prayerful consideration about taking the vaccine, as he did not want to be accused of jumping the queue.