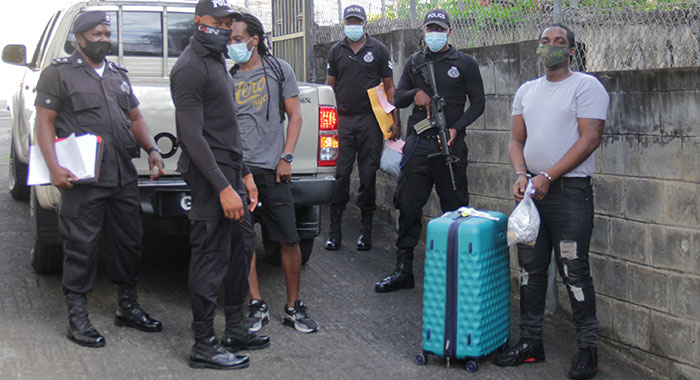 A Jamaican man was on Thursday brought before the Serious Offences Court in Kingstown, charged with possession of a prohibited weapon and 60 rounds of 5.56 ammunition, both of which are prohibited in St. Vincent and the Grenadines.

Linford George Robinson, 39, of Kingston, pleaded guilty to a charge that on Feb. 9, at Gibson Corner, he had in his possession one Zaviar AR-15 rifle, serial number ZZ 190-797, a prohibited weapon, without the authorisation of the minister.

Robinson, whose local address is Gibson Corner, also pleaded guilty to a charge that on the same date, also at Gibson Corner, he had in his possession 60 rounds of 5.56 ammunition without the authorisation of the minister.

The prosecution asked that the matter be adjourned to tomorrow (Friday) for the hearing of the facts and sentencing.

Robinson’s lawyer, Grant Connell, did not object to the application.

iWitness News was reliably informed that Robinson arrived in SVG on Sept. 19, 2020 on board a Caribbean Airlines flight from Jamaica.

Well-placed sources have told iWitness News that Robinson was arrested as police continue a two-year on-going investigation into the alleged activity of a suspected “hit man” in SVG.

This publication knows of no allegation that Robinson was involved in the killing or attempted killing of anyone and no such charge has been brought against him.

Police said in a statement on Thursday that acting on information, a party of officers were dispatched on mobile patrol duty about central division in search of a motor vehicle, which was allegedly occupied by three males.

The vehicle in question was spotted in Rillan Hill heading in the direction of Kingstown.

The officers followed the vehicle and ordered it to stop at the Questelles Police Station.

The officers approached the vehicle and the officer in-charge of the operation identified members of the party to the suspects.

The three suspects were identified as Erasto Nero, of Edinboro, Eric Conliffe, of Kingstown Park, and Linford George Robinson, of Jamaica/Gibson Corner.

The men were invited to exit the vehicle and a search was carried out on the men but nothing illegal was found.

A search was then carried out on the vehicle and a transparent plastic bag with a black plastic bag on the inside, containing what appeared to be plant materials resembling cannabis was found.

All three suspects were cautioned and Nero told police officers that the contents in plastic bag belonged to him.

The offence of possession of controlled drugs was pointed out to him and he was arrested.

The two other suspects were “arrested on suspicion”, police siad.

All three men later accompanied the party of officers to an apartment located in Gibson’s Corner, which Robinson occupied.

A search was conducted at the apartment and one AR-15 rifle and 60 rounds of 5.56mm prohibited ammunition were found under the suspect’s bed.

He was cautioned and admitted that the firearm and ammunition belonged to him.

The offences of possession of unlicensed firearm and ammunition were pointed out to him and he was arrested.

Also on Thursday, at the Serious Offence Court, Nero pleaded guilty to possession of the drug and was fined EC$930, to be paid forthwith, or three months in prison.

He paid the fine.