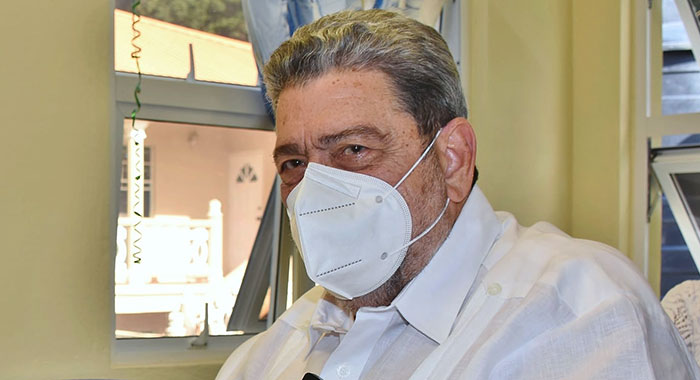 The 14-day mandatory quarantine in a government-approved facility for all persons arriving in St. Vincent and the Grenadines, including those who live alone, is intended to help keep out the UK and Brazil variants of the virus.

This is according to information provided by Prime Minister Ralph Gonsalves at a Ministry of Health press conference on Thursday.

At the press conference, a journalist said that some returning nationals have complained about the high cost of the 14-day quarantine at government-approved facilities, particularly when they have adequate facilities at their own home.

There returning nationals have to pay for a 14-day quarantine even as persons who test positive for quarantine in SVG are allowed to isolate at home.

In many instances, COVID-19 positive persons “isolate” in homes that do not meet the standard: for instance, those that only have a single bathroom, that must be shared by the COVID patient and the other residents.

“Every single country in this world imposes restrictions on persons coming into their country — every single one,” Gonsalves said in response to the question.

He said that some countries in the CARICOM region began by paying for persons to go in quarantine in hotels.

“St. Lucia did that, Jamaica did that. They have to back away from it,” the prime minister said.

He noted that the United Kingdom has a “red list” of countries, arriving passengers from which must quarantine in a government-approved hotel.

“And the cost of it for the 10 days, which they’re giving, is 1,750 pounds sterling,” Gonsalves said, adding that to get the Eastern Caribbean dollar equivalent, the number has to be multiplied by in excess of three.

He added that London recently passed a statutory rule and order, under which a person who lie about their country of original departure could be fined up to 10,000 pounds and jailed for up to 10 years.

“This is Britain you know,” Gonsalves said, adding, “Well, my own view of that is that that sounds disproportionate but that is what they themselves that they have determined.

“There is a variant in the United Kingdom, which is already in St. Lucia and in Barbados. There is a variant from South Africa, from Brazil. The world is one place. Even if you have a negative PCR, as we have seen coming from outside, you don’t know whether at the moment when you land, you don’t have COVID because between the time when you get the negative PCR 72 hours [earlier] to the time when you land in St Vincent, you have interactions. You don’t live on Mars,” the prime minister said.

“And what the health authorities have advised, they would want to make sure that that particular — those variants, which are very difficult, very challenging, that we keep them out as far as is practicable and that it is easier to contain what you have internally than if you what you bring in from outside, from an epidemiological standpoint.”

The prime minister also responded to persons who are critical of his government’s position on quarantine for arriving passengers, including persons who test negative for COVID-19, even as positive residents of the country are sent home to “isolate”.

“So what you must do, you must provide quarantining for all Vincentians in a state facility where you have who have COVID in St. Vincent and the Grenadines if persons don’t see the rationale and the judgment and the proportionality there, well, then I can’t help,” Gonsalves added.

He said that he has seen people talking about inquiring about the policy in a court.

“And I would like to see if there is a judge of reasonable temper, who would say that those restrictions are reasonably required for the protection of health and that they are not reasonably justifiable in a democratic society,” he said.

“I just give a broader scope of what is happening regionally and nationally, I mean, globally, and talk about the British one. What all that is about, I’m telling you, persons who want for other agendas, other reasons, to be carrying out these arguments. I don’t think the argument has any reasonable merit. And until I’m advised to the contrary by the public health officials, those regulations remain in place.”