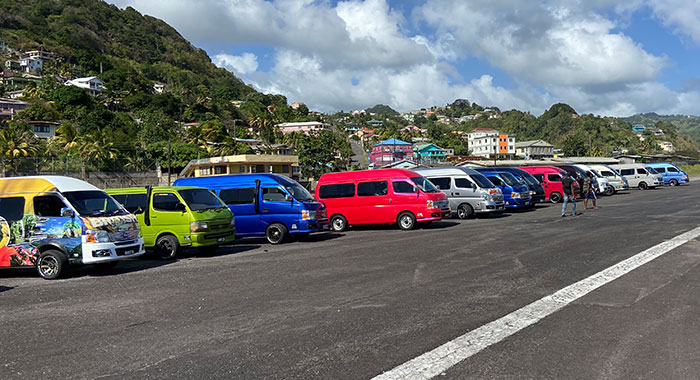 Some of the minivans at the decommissioned E.T. Joshua Airport on Monday. (iWN photo)

A significant number of omnibus operators in St. Vincent and the Grenadines, on Monday, withdrew their services to highlight the impact of new COVID-19 regulations on their businesses.

Two Saturdays ago, on Feb. 6, the government passed a set of COVID-regulations, including a rule that halves the number of passengers an omnibus can transport.

Under the rule, which is expected to expire in one month’s time, a van that is licenced to carry 18 passengers can now only transport nine, including the driver and the passengers.

However, the government has not offered any subsidy or any type of assistance to cushion the impact of its decision.

Last year, during the early stages of the COVID-19 pandemic, the government offered monthly assistance of EC$300 to omnibuses that registered for the subsidy, amidst a recommendation — which police enforced — that minibuses carry only 12 passengers.

However, this year, the government has offered no such assistance, even as a law has been passed, and most omnibuses can only legally carry seven passengers.

Police have been enforcing the rule, resulting in some passengers being left stranded when police order them out of omnibuses that flout the rule.

Further, omnibus imperators can be issued an EC$100 ticket for breaking the rule.

On Monday, omnibuses on both the leeward and windward sides of St. Vincent withdrew their services and drove into the city, stopping at various places along the way.

iWitness News met up with some of them at the decommissioned E.T. Joshua Airport, Monday afternoon.

“Seven [in a van] can’t wuk. That could never wuk,” said a conductor who works on a van that services the Kingstown-Sandy Bay route.

The conductor said that in the same way that government workers collect a monthly salary from the state, minibus operators and conductors get their wages from their omnibus businesses.

“How we supposed to mind we kids?” the conductor told iWitness News.

He complained that EC$2 for travel between Sandy Bay and Georgetown is inadequate.

The conductor further told iWitness News that the EC$1 fare for transportation from Overland and Georgetown has been that way for too long.

He said that minibus operators understand that the police had said that they were going to target minibuses on Monday, hence the decision to strike.

“We were carrying the same amount of passengers, because that cannot work,” the conductor said in an admission that they had been flouting the new rule.

Another conductor who plies the Georgetown to Kingstown route said that with seven passengers there is no need for a conductor.

He said that before the rule, a minibus could make between EC$400 and EC$600 daily after subtracting the cost of fuel.

Out of this would have to come the driver and conductor’s wages, and other operational costs for the vehicle.

Now, the new rule, the daily intake after fuel has fallen to EC$150 the conductor told iWitness News.

A conductor on the Kingstown-Campden Park route said that before the change of the law, the situation was “very beautiful”.

He said that before the change of the rule, his van made between EC$400 and EC$600 per day.

“We can’t handle the stress, so automatically, we have to pull off,” he said.

“We could carry the seven, but you see every seat we miss out pon, they have to pay we for that seat. The government should pay for that seat…

Meanwhile, the owner of a van that travels between Sandy Bay and Georgetown explained some of the costs of operating an omnibus.

“At the end of the day, we have our driver, we have our conductor. We cannot buy diesel, the van needs to be maintained — every three weeks you have to service…”

She told iWitness News that before the rule, she could make between EC$300 and EC$500 depending on the number of vans that are operating.

Out of this, she has to pay the driver and the conductor.

“I have to pay myself. Not because I am the owner,” the woman told iWitness News.

Asked how she would respond to the argument that while the van was operating they were at least making some money, as opposed to none during the strike, the woman said:

“No. It’s rough. No lie. I think right now, the government needs to — over the river fares need to raise,” she said, referring to the area north of the Rabacca Dry River.

She said that her third party insurance policy insurance is in excess of EC$800 annually.

“You have to buy tyre — $1,400 for tyres,” the woman said, adding that she intends to keep the van off the road until the government does something about the situation.

Meanwhile, an owner/driver who travels between Kingstown and Villa/Glen told iWitness News said he operated his van for one day after the rule came into effect.

“At the end of the day, it ain’t make no sense,” he said, adding that he intends to keep the van off the road until the government does something about the situation.

He suggested that the government subsidise the licence, noting that the cost of insurance has not been reduced.

iWitness News noted that the government gave a subsidy last year, but the operator pointed out that none was offered this year, even as the COVID-19 situation in the country has worsened.

The owner/operator said it is impossible to do physical distancing in a van.

“You put two persons at each window, but what about the person in front? He ain’t six feet apart. He’s about two feet away from you. So there is no social distancing in a van.

“Let everybody put on their mask when they enter a vehicle,” said the man, who pointed out that airplanes are still arriving with their maximum number of passengers.