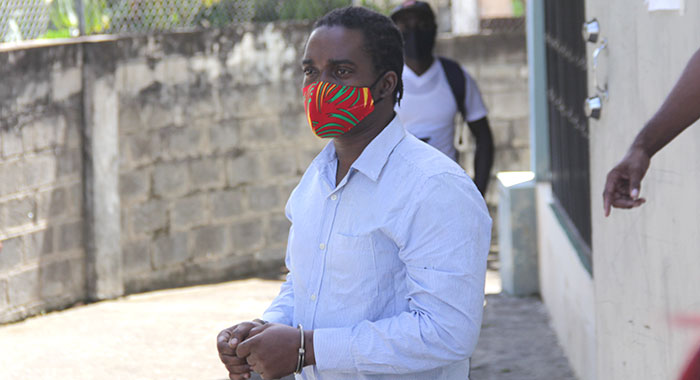 Linford George Robinson on his his way to prison on Friday. (iWN photo)

The Jamaican man who had an AR-15 rifle and 60 rounds of 5.56mm ammunition in his apartment at Gibson Corner last Tuesday will spend the next five years and four months in prison in St. Vincent.

On Friday, at the Serious Offences Court, Chief Magistrate Rechanne Browne sentenced the man, Linford George Robinson, 39, of Kingston, Jamaica to five years in prison for the firearm and two years for the ammunition.

The facts of the matter are that on Tuesday, Feb. 9, about 4:31 p.m.  Corporal 615 William led a party of Rapid Response Unit personnel to execute a search warrant on an apartment at Gibson Corner, which was occupied by the defendant, who was already in custody.

Robinson had been taken into custody in Questelles after police, acting on information, stopped a car PD 298, in which Robinson, along with Vincentians, Erasto Nero, of Edinboro, Eric Conliffe, of Kingstown Park, and Robinson were travelling.

Nero, who was the front seat passenger, was nabbed with 832 grammes (1.83lbs) of cannabis, for he paid the court an EC$930 on Thursday.

Robinson was in the back seat of the vehicle and later on Tuesday, police took him to Gibson Corner to an apartment that he occupied.
The officers used the keys that were in Robinson’s possession to open the apartment, which is an open room with a single bed.

Under the bed, Williams saw a wooden box containing a large transparent plastic bag, which contained the firearm.

The ammunition was 5.56mm and totalled 60 rounds.

When cautioned, Robinson said, “Officer, is some men bring it to me to hide.”

At the apartment, Williams also found a Jamaican passport bearing the defendant’s name and a suitcase with his clothes.

The firearm was dusted for fingerprints but none was found on the weapon.

In his evidence, firearm expert Station Sergeant of Police Julian Cain told the court that the firearm has a maximum effective range of 550 mm.

It was in good working condition and the only part missing was the butt stop, which does not affect the functioning of the firearm, but could cause some discomfort to the person firing, Cain said.

The expert said that the butt stop can be easily removed and makes it easier to conceal the weapon.

The officer told the court that the firearm could be fitted with magazines of different capacity and the two magazines that Robinson had could hold 30 and 45 rounds respectively.

Cain said that the ammunition found with the firearm is the original type designed to be used by the firearm.

“It’s new, with no sign of corrosion,” he said.

“It is a new firearm; well kept,” Cain told the court, adding that the weapon is the same type used in a lot of mass shooting incidents around the world.

In mitigation, defence counsel Grant Connell told the court that Robinson is the father of two children.

He noted that the defendant pleaded guilty at the first opportunity, has not previous convictions, and expresses remorse for his action.

He was granted six months stay in the county, the lawyer said, adding that within 90 days of Robinson’s arrival, he had a ticket to leave the country on Dec. 26.
Connell said that Robinson was unable to do so because of issues with getting a COVID-19 test in time.

The lawyer said that Robinson was in the company of friends he met in St. Vincent when police stopped them on Tuesday.

During the stop, police found “local vegetation” — cannabis, Connell said, adding that his client did not take the police on a wild goose chase.

“He told the police it was brought to him and the demand made for him to hold it. As a foreigner in a land, such a demand, he did,” Connell said and reasoned that there was an element of coercion involved.

“There was a fear factor,” the lawyer said, adding that after the firearm was put under Robinson’s bed, he never touched it and this is why his fingerprints were not found thereon.

The lawyer said that Robinson’s actions are at variance with a hardened criminal.

“He had a choice; he could have misled the police and the firearm could have been on the streets,” he said.

“He realised that he erred and he throws himself at the mercy of the court and begs for leniency,” Connell said, adding that Robinson has relatives who could assist in paying a fine.

The lawyer went through the sentencing guidelines and suggested that the court impose a fine and deportation, rather than a prison term.

‘How did this firearm get to our shores…?’

He said that the fact that Robinson’s fingerprints not being on the firearm was not an indication that he had not touched it.

“He could have used gloves,” Delplesche said.

He said that the defence counsel had done an excellent job in mitigating on behalf of this client.

“But as brilliant and eloquent as it was, the seriousness of the offence ought not to be lost in those qualities,” the prosecutor said.

“How did this firearm get to our shores and got into the hands of him with whom it was found and what is the purpose of it in our Land of the Blessed?” Delplesche said.

“Why would someone in St. Vincent and the Grenadines have such a firearm and if we are to go with the defence, give it to a visitor?”

The prosecutor noted that Robinson had come to SVG legally, adding, “And suddenly, he is found with a firearm of this nature.”

The prosecutor asked the court to sentence Robinson in keeping with the seriousness of the offence.

4 replies on “Jamaican to serve 5 years for prohibited weapon”