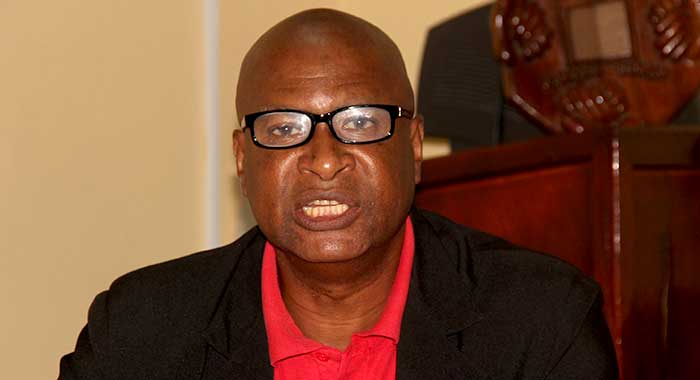 The St. Vincent and the Grenadines Teachers’ Union (SVGTU) says that the working conditions online are having an untoward impact on teachers, including their eyesight and psychological wellbeing.

“And when we say working conditions, we are not only speaking about the physical condition under which teachers have to operate,” union leader Oswald Robinson told a press conference on Friday.

Schools in St. Vincent and the Grenadines are yet to reopen after the Christmas vacation and students at all levels are taking classes online.

Robinson said that, as a result, most teachers are working physically at their home.

He, however, said that their conditions of work have been affected because teachers are working for longer hours.

“Online teaching is not the same as physical, face-to-face teaching,” he said, adding that it has both advantages and disadvantages.

He said that teachers have been complaining about the impact on their eyes of prolonged use of handheld devices and computers.

“A lot more teachers now have been seeing the opticians, the eye specialists for glasses,” he said, adding that he is sure that this will impact the students also.

“This is something that we need to pay attention to and we are advising our teachers to do your medical and keep a check.”

Robinson said that teachers’ stress levels have escalated and some teachers are experiencing “professional fatigue”.

“The majority of our teachers love the students so much that they have this fatigue trying to reach the students online and cannot reach.”

The feedback from teachers is that some schools have 100% student attendance, but this is not consistent throughout the week.

“The majority of the schools, the primary schools especially, you have approximately 50% of the students who are not online,” he said, adding that the union discussed and raised this issue time and time again.

“Some of our stakeholders are now opening their eyes to realise these things are the reality.”

Robinson said there are students who still do not have compatible devices, notwithstanding the government’s promise, since last June, that it will purchase 30,000 tablets for students.

“Yet, the primary school, which is the foundation, the majority does not have tablets.”

He said that parents are trying and some of them have one device but have to go to work and in those instances, students continue to have lack of access to online classes.

The union president said that last year, the union wanted to find out from teachers what the issues are.

“There are people who twisted it and say, ‘Oh, you join with the ministry to investigate teachers’ — because I think the Minister of Education at the time made a statement about investigating what is happening.”

Robinson noted that to investigate “doesn’t mean that you are going to apprehend and lock up.

“It is a terminology in research: to find out what is the real cause and the issues for development: ‘How can we assist and support?’”

He said that the psychological impact has become more complex and is compounded.

“There were teachers who were at the point of resigning because people wanted a radical transformation, a radical transition and a lot of these teachers, especially older teachers, they did not have some of the basic skills of ICT.”

He said that Microsoft Teams, the platform that most schools use for online teaching, was new to some teachers.

Some teachers, especially the one who had not received any training at all needed some time to recompose themselves, transition their minds and teach themselves “and try and try until they get it right,” Robinson said.

“But they are human beings, they are not robots, and they have their limitations also. So I am calling on the authorities to respond positively. It has to be a developmental approach. It is not negligence as I am hearing on social media and some of the talk shows.”

Robinson said there is now talk of “a blended approach”, a suggestion that the union made to the ministry of education last year, when the COVID-19 situation was not as bad as it is now.

The suggestion was especially for the large schools, he said.

Robinson raised questions about how often a teacher would have to go to school even as they have to also prepare for online teaching.

He pointed out that some of the teachers teach more than one subject.

“And some of them teach more than one level. Unless people understand the nature of what you are asking, the demands you are making, and unless we have dialogue, this letter has been calling for social dialogue.”