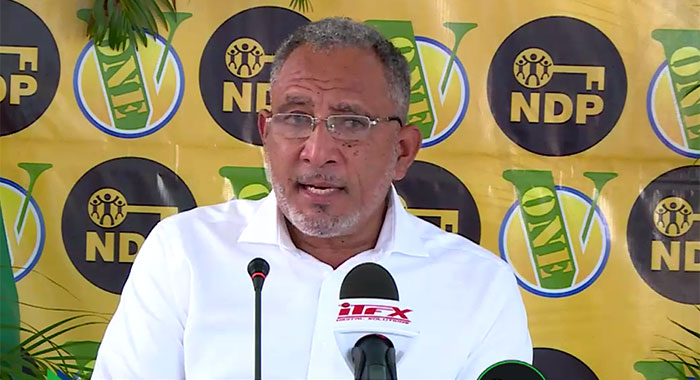 Leader of the Opposition Godwin Friday says that the cluster of COVID-19 cases at the Mental Health Rehabilitation Centre at Glen is alarming.

Speaking on NICE Radio on Monday, Friday said that the 92 cases detected among patients and staff is an indication that even more testing is needed to bring under control the spike in cases nationally.

“Right now, in the COVID crisis, the COVID fight that we are having, we see, we watch this alarmingly over the weekend. I saw there were 22 cases, then 23 cases, and then 49 cases of new COVID cases at the Mental Health Centre in Glen,” he said.

Friday was mentioning the number of cases detected on each of the three previous days.

Health authorities say that they have detected 86 cases among patients and six staff members and that contact tracing and isolation are being done to contain the spread.

The cases come as the numbers had been trending downward since a spike last December that has seen over 1,492 persons contract the illness locally.

St. Vincent and the Grenadines had recorded a total of 1,628 cases since March 2021 and eight persons have died as a result of COVID-19.

So far, 938 persons have recovered and 682 cases remain active.

“I mean, how in God’s name? Everybody all over the world knows that it is in these institutions where you have vulnerable people where they have had most of the outbreaks,” he said.

“The nursing homes in the United States, in Europe, in Canada, the places where elderly people live; prisons, places similar to the Mental Health Centre here in St. Vincent.

“These are places where we have been on alert that you have to make sure that you put and maintain very strict protocols in place because once it gets into that population it spreads rapidly.” he said.

He said it did not seem that the authorities had put the requisite protocols in place.

“… because all of a sudden, you have this massive outbreak, 92 cases I see from the iWitness News article that I have been following,” the opposition leader said.

He said he knows that the union had been demanding that the workers be given the proper personal protective equipment all the time.

“How are they managing out there now? Where are they isolating 92 people who have, within the last three days, tested positive for COVID-19 at the Mental Health Centre at Glen? Where are they putting those people so that they are secure?”

The opposition leader said he has maintained since the explosion of cases, that in order to bring it under control; the country must have proper isolation facilities.

“The numbers have exploded so much so now that they can’t do it at the centre they set up in [Argyle] and they don’t seem willing to rent or to set up alternate facilities to house these people.”

He said that COVID-19 patients do not want to endanger their relatives and friends.

Friday said that his heart goes out to the relatives of the persons who have died.

“We have now had eight persons who have died at a phase in the evolution of this pandemic when we have better knowledge, when we have vaccines that are available, when there are certain treatments which don’t prevent it but help to mitigate some of the worst conditions if it is caught early enough.

“And, at a time when we should be improving, we are actually going backwards because these people who have died, it has all happened within the last two months in St. Vincent and the Grenadines.”

He said that there are repeated expressions of hope that more people do not die of COVID-19.

“… but we are now up to eight and this worrying situation at the Mental Health Centre at Glen is something that everybody in this country needs to bring pressure to bear on the government because they  are just simply, they don’t seem to take this thing seriously enough.”

Friday said there is a notion that people will simply recover from COVID-19, but he noted that while more people recover, some suffer long-term impacts of having had the disease.

“And we will not — mark my word; we will not bring this under control until we have more widespread testing in the country because you’re still hearing of many cases of persons who are not part of the contact tracing chain who have tested positive either because they presented themselves at a clinic because they weren’t feeling well or they go to seek exit clearance to travel and they find that they are positive, which means these are people who were in the community who thought they were fine; like me and you.

“And all of a sudden, they go and tested and find that they are positive and they now have to go and scramble and worry and ask, ‘Who have I been in contact with?’”