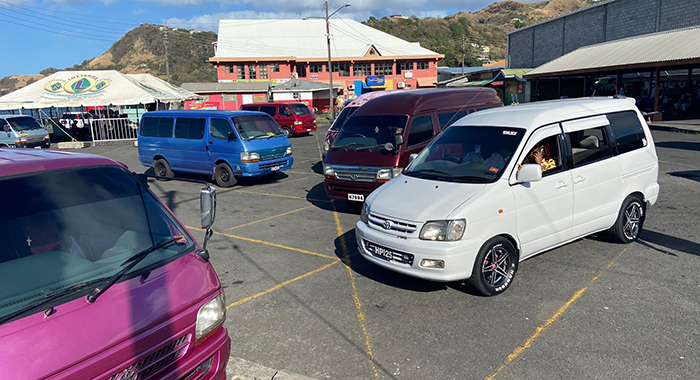 The decision by some omnibus operators to withdraw their service on Monday and Tuesday this week was a disappointment for Prime Minister Ralph Gonsalves.

Gonsalves said he has received a letter from the Vincentian Transportation Association (VINTAS), the umbrella body for omnibuses, asking that the government reconsider the maximum number of passengers allowed in omnibuses because of the COVID-19 pandemic.

The government has passed a temporary law, halving the number of passengers that omnibuses are allowed to carry. The law, which was initially in force for one month, has been extended by a further month, to March 27.

However, when the law was first passed, the government did not announce any concomitant subsidy for omnibuses, resulting in a withdrawal of service.

After VINTAS’ protest action, the government then announced that it will — as it had done last year – give omnibuses a subsidy of EC$500 or EC$600 each, monthly for two months, depending on the size of the omnibus.

“I had sent that letter to, among other persons, [Dr.] Simone Keizer-Beache, the chief medical officer, for her input,” Gonsalves said Wednesday on his weekly appearance on NBC Radio.

“So I’m going to get face-to-face, a response this morning at the Cabinet,” he said.

VINTAS has proposed to the government new maximum numbers of passengers in the face of the pandemic.

Adams told iWitness News this week that VINTAS thinks that an 18-seater omnibus should be allowed 14 passengers, but his organisation is prepared to settle for 12.

Gonsalves, without disclosing the details of VINTAS’ request, said “… the maximum requests, they would know that that’s not reasonable — and I think they put the minimum”.

The prime minister, however, said that there could be some discussion “around that particular pole. So, we will see what that gives.

“I must just say I was disappointed that the minibus, some of them at least, withdrew their services Monday and Tuesday. I tried to wrap my head around the reasonableness of all that,” the prime minister said, adding that he has a lot of friends who operate omnibuses.

He further said that his Unity Labour Party (ULP) has a lot of support among omnibus operators.

“But I’m disappointed in those who decided that they’re going to withdraw their services,” the prime minister said.

He said that he understands that Adams had said that the government did not respond in writing after their discussions with VINTAS two weeks ago, after omnibuses withdrew their service.

“I personally called Royron Adams. I said, this is the situation, we’re making the arrangements to make the payments by the two payments $500 for the 18-seater, and those above 18-seater, the $600 a month for two months but that we will have to put conditions like you have to be on the road. You can’t expect to be parked up and get the money.

“And I also said it seems reasonable to require that you’ll be on the road for four days out of the seven days in the week. Well, six days, really — Monday to Saturday inclusive.”

But Adams told iWitness News this week that a condition that omnibuses work for at least four days a week never factored into the negotiation.

He said that VINTAS would have never agreed to such a condition, as omnibuses sometimes develop mechanical or other issues that might cause them to be off the road for a few days.

But Gonsalves said that his government’s proposal was reasonable, even as he noted that something might develop, resulting in a minivan having to go to the garage.

“From what I understand both from the letter and from what I read in the press, is that they would like that even if they stay home, you must give them the money,” the prime minister said.

“Persons will say to me, ‘Well, Ralph, how are you going to police this?’ Well, the most you can do in policing it practically.”

He said that traffic police could help to track the minibuses, adding that there are also transport officers also in the Ministry of Works.

“But it is not a precise science. All I want to say, ‘Look, I’m the custodian in these circumstances with taxpayer’s money.  Ah can’t pay you the money staying home, and I don’t think that that is an unreasonable proposition’,” the prime minister said.

The prime minister said that Adams had asked and the government had agreed to rebuild in Georgetown a restroom facility near a bus stop that had been washed away during bad weather some years ago.

“I think that’s, that’s not an unreasonable request,” Gonsalves said.

One reply on “PM disappointed with VINTAS strike”