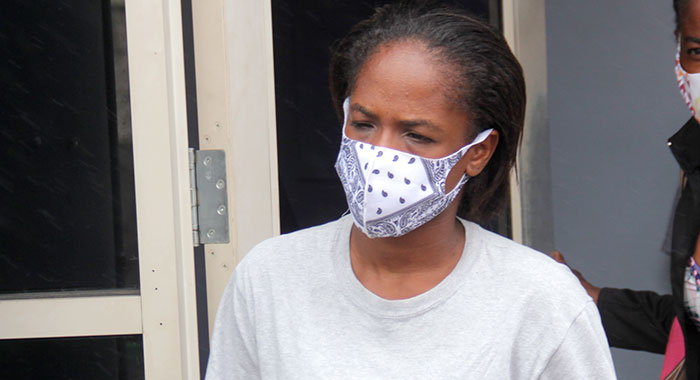 The defendant, Carleyann Harris, leaves the Kingstown Magistrate’s Court after her sentencing on Monday. (iWN photo)

A Bequia woman cried, but was deemed unremorseful, as she told the Kingstown Magistrate’s Court, on Monday, that she stole EC$6,100 from her boyfriend last week because he had pressured her to have an abortion in November.

The money was the property of her then boyfriend, Carlos Ollivierre, a 31-year-old bus conductor of Retreat, Vermont.

The facts of the case are that Harris and Ollivierre were in a visiting relationship for the past five months and she would stay at his home from time to time.

Last week Tuesday, about 5:50 a.m., Ollivierre placed the money in a sock which he put in a hat and left it at his home and went to work.

Harris was at Ollivierre’s home at that time.

Ollivierre did not check on the money again until about 6:30 a.m. on Friday, when he discovered that it was missing.

He reported the matter to the Vermont Police Station which, in turn, informed police in Bequia.

Police in Bequia arrested Harris and handed her over to their colleagues in Vermont. Harris handed over to the police EC$1,680 in cash along with one pack of synthetic hair, and a foot file.

In mitigation, Harris told the court that she has been working with the government as a janitor for the past 10 years and is paid EC$500 a month.

She said that last November, she found out that she was pregnant with Ollivierre’s child and he told her that he did not want the child and asked her to take an abortion.

Ollivierre is not the father of any of Harris’ children.

Harris said that she told Ollivierre that in her family they do not have abortions. She, however, at his insistence, underwent the procedure.

She said that, on one occasion, she and her 4-year-old son went to Ollivierre’s house to spend some time.

She said that Ollivierre “threatened the child”, who she described as “mouthy” and would say anything that comes to his mouth.

Harris told the court it was very disrespectful for Ollivierre, who she noted is 31 years old, to be saying those things to a 4-year-old child.

She said that Ollivierre choked and slapped her and said that women like she are only good for sex.

Harris said that she remembered those words because all of her life she was bullied.

“I didn’t know how love really felt until the day I gave birth to my three kids,” she said, adding that when she met Ollivierre she thought that he would have treated her differently.

“I just went to the extreme,” the woman told the court.

Harris said she chanced upon the money while packing away Ollivierre’s clothes one day and when she took the cash she was not thinking.

Senior Magistrate Rickie Burnett told Harris that she had caused herself and her children much embarrassment by her actions.

Asked if he had anything to say to the court, Ollivierre said “not really”.

In her comments, the prosecutor, acting Corporal of Police Corlene Samuel told the court that while she had heard Harris’ allegation, she did not see the link between them and her crime.

“The things were hurtful,” Samuel commented, adding that there are places, such as the Social Services Department, to which Harris could have gone to get help.

Harris told the court that after taking the money, she stayed in Kingstown and was drinking, and that this is how she spent the $4,420 that was not recovered.

“And how many children she say she have?” Samuel commented quizzically.

The magistrate, for his part, said that he had promised the Lord to be extra careful in his comment this week.

The prosecutor said that while she is not a drinker, she knows that beers are four for $10.

Ollivierre told the court that he wanted back his money, adding that some of it belongs to his mother.

“Ms Harris, you have to compensate the complainant. Put another way, you have to pay him every cent back. If you don’t, it will be prison for you,” Burnett said.

Ollivierre told the court that Harris had given his brother’s girlfriend EC$500 from the money.

However, the woman snapped at him, saying that she never gave the woman $500. She said that her aunt had sent her money and she gave Ollivierre’s brother’s girlfriend $300 and $200 for something else but that the funds did not come from the stolen money.

The senior magistrate said that based on Harris’ interaction with the court, she had no remorse at all for what she had done.

Ollivierre asked the court to give Harris time to repay the money, saying he would not want to see her go to prison.  He suggested that she be given four months.

However, Burnett ordered Harris to pay Ollivierre compensation in the sum of EC$4,420 in three months — by June 30 — or go to prison for six months.

He also bonded her for six months in the sum of EC$1,500 forthwith or three months in prison.

5 replies on “Woman steals $6,100 from boyfriend after forced abortion”