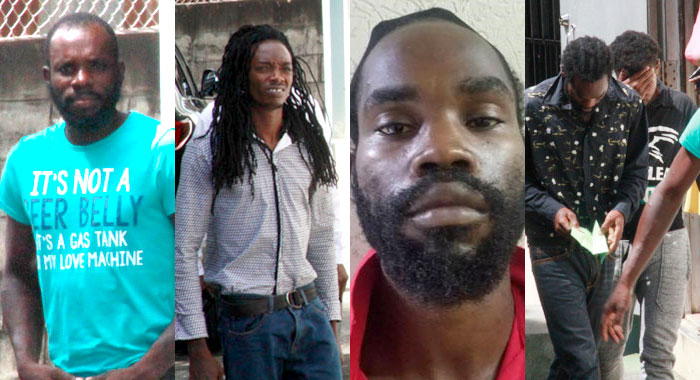 Almost three years after committing their crimes, four men were, on Monday, sentenced in connection with their attack of a man at his girlfriend’s funeral in Chauncey in May 2018.

On Monday, at the Kingstown Magistrate’s Court, Senior Magistrate Rickie Burnett fined the men, ordered them to pay compensation to the complainant, and bonded them to keep the peace.

“Gentlemen, I hope that you all will never contemplate something like this again in your lives,” he told the convicted men — Chauncey residents Kazim “Meds” Alexander, 23, Dane Daniel, 38, Junior “Trunkie” Charles, 31, and Jeronza Thomas.

The sentencing, which should have taken place on Friday, was adjourned to Monday to allow the complainant, Paul Stephens, of Barrouallie, to attend.

Stephens did not attend, although he was summoned.

The four men were convicted on a charge that on May 27, 2018, at Chauncey, they unlawfully and maliciously wounded Stephens.

They were also convicted on a charge that on the same date and place, they caused a disturbance to an assembly lawfully engaged in the performance of religious ceremony, to wit “the funeral service of Je-Tonnia Thomas, of Chauncey”.

Alexander was convicted on charges that, without lawful excuse in a public place, to wit the Chauncey Cemetery, he had in his possession an offensive weapon, to wit “an 8 inch concrete block” and a “a piece of wood”.

Daniel, Charles and Thomas were each convicted of possession of an offensive weapon, to wit “a stone”.

A video that circulated via social media soon after the incident shows a man, later identified as Stephens, being beaten viciously as he and other mourners paid their final respects to Thomas at the Chauncey Cemetery.

Thomas-Stephens, 32, was found dead on May 10 at the Kearton, Barrouallie home she shared with Stephens and their then-4-month-old child.

But on the day that Stephens was found dead, a photo was circulated on social media of a woman purporting to be the deceased with her throat slit, but of which police later said was not Stephens.

For disturbing the funeral service, Burnett fined each defendant EC$750 to be paid by June 30 or six months in prisons.

On the wounding charges, he ordered the defendants to pay Stephens compensation of EC$500 each by July 30 or spend three months in prison.

On this charge, the defendants were also each bonded for one year in the sum of EC$1,500 to be paid forthwith or three months in prison.

Burnett noted that Daniel and Charles had previous convictions for possession of offensive weapons.

These two defendants, on those charges, were each fined EC$750 to be paid by July 30, or three months in prison.

On this charge, the two other defendants were bonded for one year in the sum of EC$1,000 of three months in prison.

The men say they are all cousins, and Thomas is the sister of the deceased woman, while Alexander is her stepbrother.

At his arraignment in June 2018, Esward Charles pleaded guilty to a charge that he disturbed an assembly lawfully engaged in the performance of religious ceremony, to wit “the funeral service of Je-Tonnia Thomas of Chauncey”.

He was bonded for one year in the sum of EC$1,500 or three months in prison.

He maintained his guilty plea, unlike Daniel and Alexander, and Junior Charles.

Daniel had initially pleaded not guilty to possession of an offensive weapon, to wit a stone, but had later told the court that he wanted to change his plea to guilty.

In August 2019, the prosecution withdrew the charges against Timron “Homey” Padmore, 40, of Rillan Hill, after he made a no-case submission in connection to a charge of possession of an offensive weapon, to wit a stone.

The magistrate rejected no case submissions lawyer Ronald “Ronnie” Marks made on behalf of his clients, Alexander and Charles and counsel Linton Lewis, who represented Daniel.

In the trial, which began in June 2019, Stephens told the court he was standing with his family at the Chauncey cemetery at Thomas’ funeral when Daniel came up and asked “who is the husband of Je-Tonnia”.

The complainant said that his brother indicated that it was he (Stephens).

“He then looked at me and say, ‘handsome man,” Stephens told the court, of Daniel, adding that Daniel then turned his back towards him and said, “This is the guy who killed Je-Tonnia.”

The complainant told the court that while his fiancée died of a heart attack, he had been accused of killing her.

He said Daniel then left the cemetery and went into the main road “and then he made a sound like a dog”.

Stephen told the court that he saw Charles come up to the cemetery with a stone and said, “You kill one and want to kill my mother.”

“That is when the others came up,” he said.

“After that, I was crowded by people who were trying to protect me from them. I could not have recognised anything because I was crowded,” he told the court.

“I received lash from stones and sticks, where my brother and sisters were protecting me to get into the vehicle… I received damage to my eyes that I could not have seen; I was lashed in my head also with stone and blocks.”

Among the persons who testified were the investigator, detective Corporal Philbert Chambers (now deceased), Pastor Sheldon Nichols, who officiated at the funeral, and detective Constable Millington, who lives near the cemetery and saw the incident from her house.