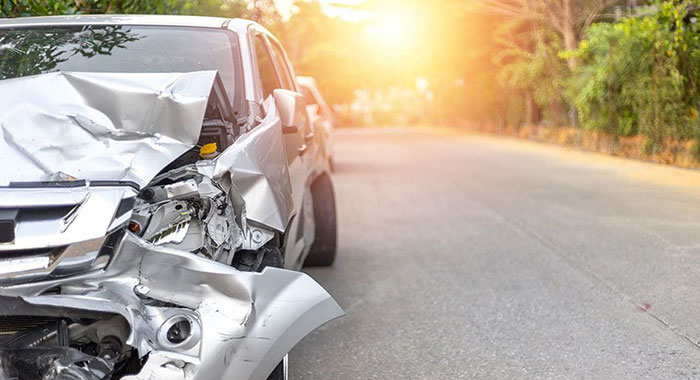 An internet photo of a car accident.

A Layou man who does not have a driving permit and was driving an uninsured vehicle panicked when he came upon police officers at the scene of an accident in Rillan Hill around 6:15 p.m. last Thursday.

On seeing the officers who were responding to the accident, Colin Butcher stopped and reversed the car he was driving, crashing into another vehicle in the process.

But, instead of stopping, Butcher drove to Buccament Bay, with police in hot pursuit, where he abandoned the vehicle and continued to flee on foot.

He was, however, apprehended and brought before the Kingstown Magistrate’s Court last Friday on four charges.

Butcher, 27, pleaded guilty to a charge that on March 18, at the Rillan Hill Public Road, being the driver of motor vehicle RQ-456, he did drive the same vehicle in a manner dangerous to the public.

He also pleaded guilty to a charge that being the driver of the same vehicle, having been involved in an accident owing to the presence of the vehicle on the road, he did fail to stop the said vehicle.

The court heard that Butcher drove for over a mile in his attempt to escape from the police.

The defendant said that he had purchased the vehicle and a mechanic friend was going to fix it for him and told him to take his time and drive it to Kingstown.

“And I decided to run a risk with the vehicle,” Butcher said, adding that when he was driving he saw some police officers in the road so he pulled aside.

“But in no time, a vehicle come up hard behind me and slam on me.”

The defendant told the court that he “swear to God” that it was the other vehicle that crashed into the rear of the vehicle he was driving.

The magistrate noted to Butcher that he had no authority to have been driving the vehicle in the first place.

The prosecutor, Police Sergeant Renrick Cato, noted that after the accident, Butcher did not stop.

The magistrate said he always asks people who want to drive although they do not hold a permit what would happen if they knock down and kill someone.

“If you want to take the chance to drive on the roads of St. Vincent and the Grenadines without being the holder of a driving permit, you also have to be prepared to suffer the consequences of your action,” the magistrate said.

Cato told the court that the vehicle is licenced until June but its insurance policy has expired.

He also noted that the vehicle is a registered “R”, meaning that it can be rented, a fact that the prosecutor said was aggravating.

Cato said his understanding is that the other vehicle is written off because of the damage caused by RQ-456.

The magistrate asked the defendant if he had applied for a driving permit.

Butcher was telling the court that he had a friend, when the magistrate told him to stop.

“Leave that alone,” Burnett said, adding, “Sometimes, I can’t say what I want to say and this time is one of them.”

After a pause, the magistrate continued:

Burnett told Butcher that even if he were to apply for a driving permit, he would not be able to drive until March 2022, because he was going to disqualify him for a year.

The defendant told the court that he has been employed by the Roads Bridges and General Services Authority as a labourer for the past four years and makes EC$500 per fortnight.

He, however, told the court that he is repaying a loan and has three sons, ages 2, 4 and 6 years.

In his comments on sentencing, Cato said that the offences normally attract a fine.

He further asked that Butcher not be barred for a full year from obtaining a permit.

The prosecutor, however, asked that the court send a reminder of the serious nature of the offences, adding that he understands that the other vehicle was damaged extensively.

He said that Butcher would be responsible for repairing that vehicle, as well as his own.

“There is something that is used in the countryside – ‘tusty’ (eager to drive),” the senior magistrate said.

On the dangerous driving charge, he ordered Butcher to pay a fine of EC$400 or serve three months in prison, EC$350 for the insurance offence or one month in prison and EC$250 each on the driving permit and failure to stop after an accident charges.

The defendant asked the court to give him until December to pay the fines and the magistrate agreed, saying he could not fine a defendant in a way that sends him to prison.

Butcher has to pay the fine by Dec. 17 or serve concurrent prison sentences.

The magistrate told Butcher that he has to remind himself that December is also Christmas.