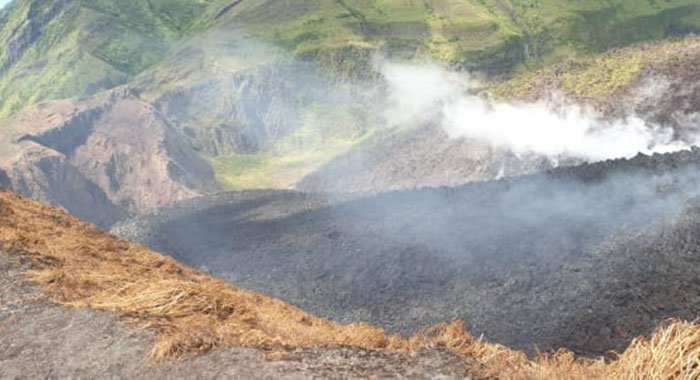 Volcano has destroyed both the 1979 and 2021 domes, seen here before the eruption. (Photo UWISRC/Facebook)

The increase in earthquakes at La Soufriere could suggest that an explosive eruption could happen soon, the lead scientist monitoring the volcano said on Wednesday.

La Soufriere has been erupting effusively since late December, and a new dome has formed alongside that left inside the crater after the 1979 eruption of the volcano.

On Wednesday, NEMO said that scientists at the Belmont Observatory, near Rose Hall, have noted a change in seismic activity associated with the ongoing eruption of the volcano.

“And one of the things that will drive it to go explosive is fresh material coming in; new material to give it energy,” Robertson said, adding that the earthquakes which began on Tuesday could indicate that fresh magma is trying to make its way to the service.

“So this is the first indication that maybe this is happening. We have to track it to see if it is really indicative of that,” the scientist explained.

He said that the material that has oozed out of the volcano since December could have been three since the eruption of April 1979.

However, this week’s events suggest that new material could be making its way to the surface.

“This magma is deeper down, is trying to get to the surface, it’s trying to find a pathway through  and in doing that, it is causing vibrations in the ground,  which our instruments are detecting,” Robertson said.

Since the effusive eruption began, scientists have installed additional monitoring equipment across the country.

Robertson said that the information generated this week shows that the equipment is functioning as intended.

“That is what they are set up there to do.  They are set up there precisely to tell us if something like that is trying to come through and we are then about to track it to see if it gets to the point where it is going to get to the surface and that’s one of the reasons we have a monitoring network. We try to track that,” he explained.

“So, in a sense, it’s probably not a good thing that is happening because it tells us that this eruption could go to a stage where we all really don’t want it to get to, but also, it tells us that the instrumentation that we put in is working; it’s detecting the events that could indicate something else that is more nasty that could happen.”

Robertson led the team that was initially deployed from the Seismic Research Centre in Trinidad after the effusive eruption began.

At the end of January, he returned to Trinidad, where the centre is located, and has since returned to relieve the teams that replaced him.

He said that the new dome that resulted from the ongoing effusive eruption is probably twice as large as it was in January.

“Last time, it was kind of something that we could still say, call a dome, but right now, it looks more like a — almost like a lava flow in a sense because it’s extended so much.”

“So it stretches from around the Larikai gap all the way to the place where the fumarole is on the pre-existing dome.”

He noted that eruption continues to be effusive but there have been some slight changes since Tuesday.

“… we have now started to feel what we call proper earthquakes,” he said, adding that up until Tuesday, most of the earthquake activity from the volcano was really related to the dome building itself up — which scientists call dome emplacement events.

“So you have magma coming out and oozing out and as it oozes out, its solid rock, because it is solid rock, is moving, it has gas and so on, all of those general seismic signals.”

He said these signals don’t travel very far and were only captured by stations very close to the volcano.

“But early yesterday (Tuesday) we had a small swarm of events and late yesterday evening we started to have proper earthquakes, what we call volcanic tectonic earthquakes, which are earthquakes associated with more rock breaking and magna trying to get through from below the ground, not something at the surface.”

Robertson said that these types of earthquakes tend to have a little bit more energy and larger in magnitude and detected by more volcano monitoring stations.

Robertson said that while he was speaking on the programme, the monitoring station recorded the biggest event since the increased activity started.

“We were not surprised. We expected people to feel them. If you hadn’t felt the one before, I think you might have felt the one — I think it happened about 10-15 minutes ago, maybe less than that.”

Robertson explained how volcanoes erupt, is that liquid rock — magma — tries to push its way through the ground.

Rock above the magma stops it from pushing its way to the surface and the magma builds up enough pressure that eventually it pushes that rock.

“When it does that, it breaks the rock and in breaking the rock it generates seismic signals that we call volcanic tectonic earthquakes, which we detect. And these have a lot more energy than the dome emplacement events that we had before.

He said that the earthquakes are a clear indication that magma is trying to get to the surface.

“So it is something that we are keeping a close eye on in terms of whether it is indicative of something changing, so is it going to move from effusive to something different.

“That is something that we are going to be looking at and monitoring quite closely as the hours go by, and the days go by in the next couple of days,” Robertson said.

He said that the material that the volcano has emitted so far could have been left over from the 1979 eruption and the fact that it came to the surface quietly suggests that the pathway is “well lubricated”.

However, the activities that began on Tuesday suggest that material from deeper in the volcano is trying to get to the surface.

He said that the scientists do not know if this means that the material will get to the surface.

“We have to keep tracking it to see if the signature of the signal will change as it tries to get further up. The number of events might change; the magnitude might change.

“There is a possibility that it will get to the surface, it will add to what is there now and because of the fact that it is fresher, it would change the way in which the material is erupting, so it could change it from being effusive to being something that is a bit more energetic.”