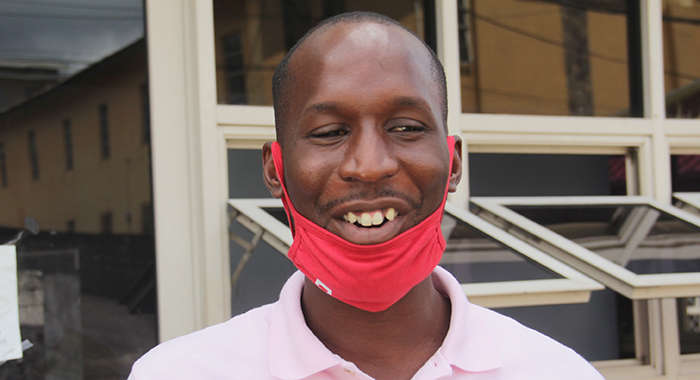 A disc jockey was, on Tuesday, ordered to pay a fine for using a swear word at a fete after a police officer spoke to him about playing, at the event, songs containing expletives.

Rayparker Rogers, aka DJ Maff, pleaded guilty to a charge that on Oct. 27, 2019, at Arnos Vale, in circumstances likely to cause a breach of the peace, he made use of indecent language, to wit, “no f**king police boy can’t talk to me. Way the f**k them think this is?”

He also pleaded guilty to a charge that he resisted the arrest of Dwayne Bailey, inspector of police, he being a police officer acting in the due execution of his duties.

Rogers pleaded not guilty to a charge that he assaulted Bailey, he being a police officer acting in the due execution of his duties.

In presenting the facts, Cato told the court that Bailey was, at the time, head of the Special Patrol Unit, based at Ottley Hall, and is now second in command at Her Majesty’s Prisons.

On the date in question — Independence Day 2019 — about 2 a.m., Bailey and other officers in uniform from the Rapid Response Unit were on duty at the Arnos Vale Playing Field, where an event dubbed “Colour Fete” was taking place.

Rogers was a DJ at the function and he began playing music containing expletives and Bailey went onto the stage and asked Rogers to desist.

As Bailey was walking away, Rogers continued playing the music with expletives and said in the microphone the words that led to the complaint.

Bailey pointed out the offence of indecent language to Roger and told him he was under arrest.

The officer took Rogers to the police transport, where he began to behave aggressively and pulled away his hand.

Bailey informed Rogers that he would also be charged with resisting arrest.

Rogers gave a caution statement, saying that while playing music, he played a song with expletives “so I pull up the song, meaning I stopped the song”.

He said he saw a police officer approach him and told him to keep the music clean, then the officer left the stage.

Rogers said he continued playing music but while “in the juggling, playing music, a song with ‘p***y’ played shortly after” and the same officer came and pulled him off the stage and told him he was under arrest.

“He threw me in the transport and began beating me up,” Rogers further said in his statement.

In mitigation on behalf of his client, counsel Grant Connell told the court that Rogers is 30 years old and father of two young boys.
The lawyer said that while the police concluded that Rogers was speaking to them, events like the one at which the incident occurred “sink to an all-time low and in the society in which we live, the low seems to be the high”.

He said that the DJ is in a bit of “a quagmire” in that if a DJ plays a song with an expletive and reduces volume at the expletive, the gathering would continue to sing the song.

Connell said if the police enforce the rule in a hard and fast way, there would be hundreds of persons to arrest at these events.

“It is just a manifestation of the lawless society that we are living in,” the lawyer said, adding that it is somewhat “harsh” to take his client and make him an example.

The lawyer said that the law must also be enforced regarding setting the environment in which these parties happen, including the age of the persons who attend.

He said that the offensive words that the police complained of
“no longer really startles anyone in the society because it adds to the lawlessness so the law seems only to be applicable in the strictest sense when it come to the court.

“It’s like Christians. When you are in church, straight; as they go outside, most of them don’t apply–”

Connell said that his client was remorseful for his action and was asking the court to impose a fine “that reflect his means – very small – and some time to pay”.

Meanwhile, in his comments to the court, the prosecutor said that the offence of indecent language seems these days not to carry the same weight.

He, however, said that the difference was that Rogers’ comments were said over a microphone after having been warned by the police.

Cato — a former instructor at the Police Training School — said he always advises that officers warn people before arresting them for using indecent language.

The prosecutor said that the incident occurred at an event that was attended by persons of all ages.

He also noted Bailey’s rank, adding that he is an officer that is well known across the country.

But Connell countered that the society has been allowed to spiral out of control and” a fishing rod” was being used “to pick out one” — a reference to his client.

The senior magistrate said that he was sentencing one matter, the one that was before the court.

Burnett also noted that Rogers had used the indecent words after the interaction between him and the police officer.

He ordered Rogers to pay a fine of EC$250 by April 30 or spend one month in prison.

For resisting arrest, Burnett bonded Rogers in the sum of EC$1,000 for one year. If he breaches the bond, he must pay the amount forthwith or go to prison for three months.

2 replies on “DJ fined for swear word at fete”