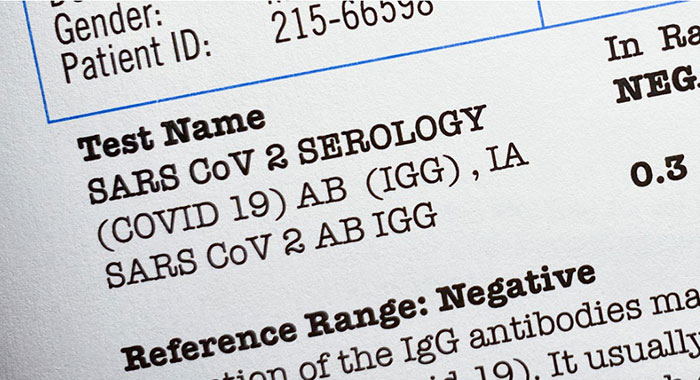 The Public Service Union and its lawyer say that the government is perched on “a slippery slope” in asking public sector workers to submit to their heads of department the results of their COVID-19 tests.

“We, as a union, will not advise any public servant to divulge your medical records or medical tests to any supervisor or head of department,” PSU President Elroy Boucher told a joint press conference with the St. Vincent and the Grenadines Teachers’ Union (SVGTU), the Police Welfare Association (PWA) on Saturday.

“We are going down a very slippery slope. Your medical information is between you and your doctor. That’s private and privileged information,” Boucher said.

The government has announced a policy that public sector workers who have not taken at least one dose of an approved COVID-19 vaccine must undergo regular testing — up to once every two weeks.

State employees who have taken a jab have until Wednesday, April 7, to submit proof of vaccination.

Those who opt not to be vaccinated must provide their COVID-19 test results.

Boucher said every public servant has the freedom to take the test at the frequency outlined by the government.

“It means, therefore, by this freedom of choice, that it is within his or her rights to decline from taking such a test. And, basically, I’m stating that as a public servant, you have a right to refuse to take this particular test or the intervals that have been stated.”

Boucher, however, said that if a public servant wants to know their COVID-19 status or feel they might have been exposed to the illness, “by all means, of course, do what you must and if you desire to take a rapid antigen test then do so”.

He, however, said that from a PSU general meeting last week Monday, March 29, “there has been no public servant who has agreed with this policy.

“And I’m talking about even those who have been already vaccinated and they maintain that whether taking a test at this particular interval, or being vaccinated is their fundamental choice so to make, and we must maintain that choice; that must not be dictated to us.”

Boucher said that every public servant should make an informed decision as regards taking a vaccine.

“As a union, we have been encouraging public servants, Vincentians, to be vaccinated,” he said, even as he reiterated that the union recognises this to be an individual’s choice.

“Everyone has to do their research, listen to their doctor, their healthcare person, and be satisfied in their mind that that is really what they want to do,” Boucher said.

“So, let me state again, the policy set out by the government, that very policy, we have serious objections to it. And as such, public servants must stand and must stand to maintain your freedom of choice to choose whether to take a vaccine or whether they wish to be tested. It is their choice, and it must not be dictated to them.”

Meanwhile, Jomo Thomas, the PSU’s lawyer, told the press conference that there is no broad legislative regime under which the government proposes to implement the proposed vaccine or test policy.

“There’s a slippery slope here, and I think Mr. Boucher raised it. There is a proposal, which says that public workers must now take their medical records into a supervisor.

“Now, this strikes at a fundamental right to privacy. And the slippery slope is a dangerous one. Because if we are saying now, we have to supply our medical records as it relates to the coronavirus to a supervisor, what would be next? What would be next? So these are all of the things that are critically important from a legal standpoint,” Thomas said.

Thomas, whose firm, Jomo Thomas Chambers, also represents the SVGTU, said from his conversations with the union, and the PWA, he does not think they are looking for a fight.

“They are simply looking to represent and to protect their workers, their members, from any procedure that is overly invasive. And where there are other measures which can be carried out, which would assist in St. Vincent and the Grenadines fighting the coronavirus and putting us back in a place where, sooner rather than later, we could go back to the normal,” he said.