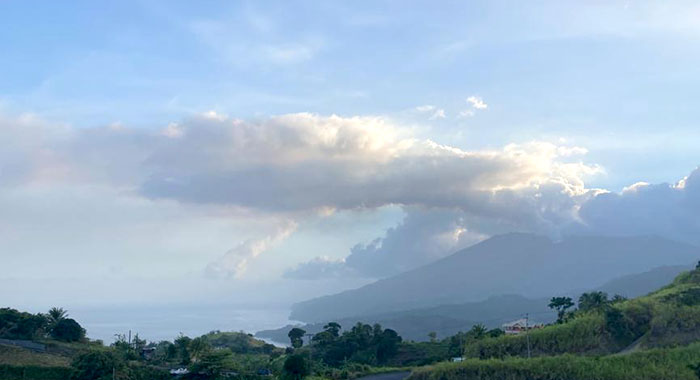 La Soufriere, which has been erupting effusively since December, can erupt explosively in hours or days, Professor Richard Robertson, the lead scientist monitoring the volcano, said on Thursday.

Robertson noted at an emergency press conference hosted by Prime Minister Ralph Gonsalves, that the heightened volcanic-tectonic (VT) earthquakes in March had   suggested that fresh magma was trying to get to the surface.

The prime minister said that no evacuation order has been given, but the relevant legal declaration has been made to put the various agencies on alert.

Robertson noted that there was another swarm of these earthquakes about a week ago.

However, about 3 a.m., on Thursday, there was another significant change in seismicity, where the station closest to the volcano began recording low-level tremors, he said.

Robertson, a geologist, said that a tremor is, essentially, a continuous vibration of the ground.

Another band of tremors began around 1 p.m., as Robertson was speaking during the press conference.

He said that there are now “banded tremors”, which are usually associated with magma moving to the surface.

Another thing that the monitoring team noticed Thursday morning was elevated and continuous emission of gas.

These gases have been sustained, which is another indication that fresh magma is coming through, Robertson said.

He said that the suggestion is that this magma is at or close to the surface and the   possibility of the volcano moving to explosive has increased significantly, based on the activity being seen.

However, given the data, the monitoring team is still unable to say when an explosive eruption might happen, Robertson said, adding that what is clear is that the volcano has “upped the ante”.

“We are now into a period where we will not be surprised if sometime in the future we have explosion or explosive activity,” he said.

Robertson, however, said that his team would also not be surprised, if the volcano continued to erupt effusively, as it has been doing for the last three months.

“The volcano has changed, it has given us a bit more signals,” he said, adding that  the eruption began with effusion, there was then the VT earthquakes and now the tremors that are associated with steam being driven by magma.

He said that the possibility that the material now coming out of the volcano could have more energy is what increases the chances of an explosive eruption.

Robertson said that his recommendation to the National Emergency Management Organisation (NEMO) is that preparations be finalized within a few hours because scientists are unsure about the time scale of an explosive eruption.

He said that as he was speaking, the next period of banded tremors had started, “quiet on time”.

Meanwhile, Michelle Forbes, director of NEMO, said that her team had been in discussions, at Cabinet, with various agencies to heighten preparation in the event that an evacuation order is given.
She said that disaster managers were preparing shelters, the response mechanism had been fully activated and that the national disaster management council would meet at 2 p.m.

She said that communities north of Rabacca Dry River should be ready in the event that an evacuation order is given.

Forbes said that arrangements should be put in place to move elderly persons who need to move and that NEMO is working with agencies of government and the private sector to have things in place in the event of an evacuation.

Meanwhile, Gonsalves made a stage 3 declaration, which under the NEMO Act, orders the relevant agencies to prepare for a possible eruption of the volcano.

The next state is 4, indicating that an explosive eruption is actually taking place.

This alert stays within the framework of an orange alert, Gonsalves said, referring to the stage at which the alert has been since the effusive eruption began in December.

He said that his government will follow the science and will continue to take the advice of Robertson and his team of scientists.

“And if the occasion arises within the next few hours or the next few days, that it becomes necessary and desirable for an evacuation order to be issued, then it will be issued and this is the stage where that declaration is made within the framework of the law,” he said.

He said that Robertson had told the government that if the volcano erupts explosively, there might be a four-month period of evacuation.

The prime minister said that his government has been in contact with friendly nations, including the United States, Cuba, and Venezuela to discuss possible assistance.

He said that Barbados and St. Lucia are willing to receive evacuees, but they will have to be vaccinated against COVID-19.

Further, Royal Caribbean has indicated that it could get to St. Vincent by Wednesday night, a cruise ship that can house 1,500 persons, who will also have to be vaccinated before they are allowed to occupy the vessel.

Next Monday’s scheduled reopening of school has been suspended until further notice.

One reply on “BREAKING: Volcano could erupt in hours, days — scientist”