Evacuation ordered as volcano ‘is trying to clear its throat’ 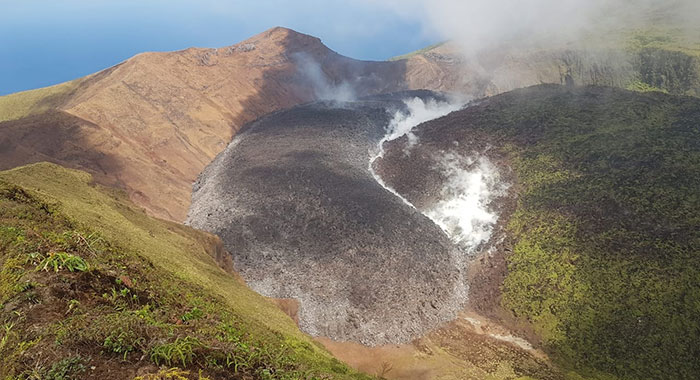 Prime Minister Ralph Gonsalves, on Thursday evening, ordered that all persons evacuate from the Red Zone, as La Soufriere could erupt explosively, without further warning, within the next 24 to 48 hours.

Gonsalves noted the stage 3 alert issued earlier in the day amidst tremors at the volcano, which began at 3 a.m.

The prime minister said that he was in a national disaster management council meeting Thursday afternoon when he got word from geologist Professor Richard Robertson — the lead scientist managing the volcano — that things had deteriorated.

Speaking at an emergency press briefing, the second for the day, Robertson explained that the tremors meant that the volcano has been shaking throughout the day.

He said that there had been six periods of tremors, interspersed by about two-hour breaks.

“The significant thing that has changed since the last briefing though is that the last period of tremor was accompanied by periods of venting, gas venting, significant pulsing of the volcano, where …, for want of a better word, it looks like it is trying to clear its throat…

“At this point, we cannot say for sure and cannot give any further clear warning that nothing would happen within the next 24 to 48 hours,” Robertson said.

“So when we briefed the prime minister, [it] was to say that there is no further warning we expect, and, therefore, to guarantee safety of people, it’s best to take certain decisions.

“So right now, we will not be surprised if, for example, sometime between the next 24 to 48 hours, there are explosions from the volcano that are much more significant than we have seen so far. The pulsing is one thing but explosions are different. We seem to be clearly heading to something that might be explosive and, therefore, we need to take the necessary action to safeguard life and limb.”

He further ordered the exclusion of persons, vessels or vehicles from such promises and areas, save and except for the purpose of effecting the said evacuation.

He said that the order comes into immediate effect.

Some 20,000 persons are expected to be evacuated from the Red Zone.

Gonsalves said that all arrangements had kick-started and the process began.

He urged all persons to be calm.

“Do not panic, be disciplined, be orderly,” he said, adding that the head of all subcommittees of the National Emergency Management Organisation (NEMO) were at the national emergency council meeting and know what they have to do.

“It is a question of effecting the plans,” the prime minister said.

There are a lot of details I can’t talk about but these are the things that are to be implemented. Do not panic, be orderly, be disciplined and with God’s grace, we will get through this very well.

Speaking at the same press conference, NEMO director, Michelle Forbes announced that the alert level has been raised to red — the highest on the four-level ranking.

She said that communities from Georgetown to Fancy on the east coast as well as Richmond to Petit Bordel on the west are to evacuate.

All emergency shelters have been activated, Forbes said.

She encouraged persons moving into emergency shelters to take along food and water to last for the night, adding that they must also wear facemasks, in light of the coronavirus pandemic.

Forbes said that evacuation will be done by sea from Chateaubelair, in North Leeward, to Barrouallie, located in Central Leeward.

“The vessel should have left Kingstown or should be leaving Kingstown,” Forbes said.

“Let’s cooperate with each other. You know the assembly points in your community. We will indicate at what time the buses will get to the community for those persons who do not have their private transport. We expect that you will do this in an orderly fashion…” she said.