Scientist expecting ‘a bigger eruption’ than in 1979 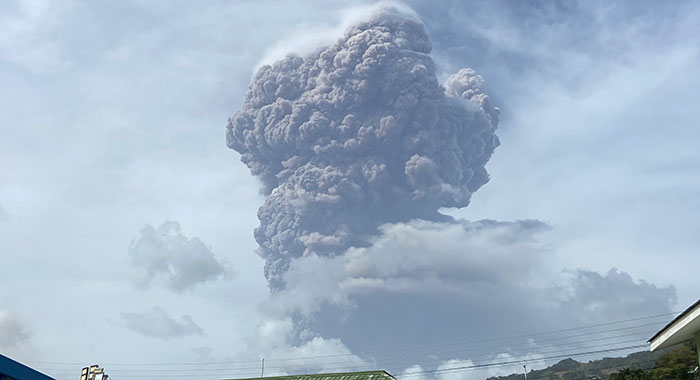 La Soufriere sends and ash plume into the air during and explosive eruption Friday afternoon, seen from Kingstown, on the southern end of St. VIncent. (iWN photo)

The current explosive eruption of La Soufriere is expected to be bigger than the last one, in 1979, geologist Professor Richard Robertson said on Saturday.

Overnight the seismic tremors that have been ongoing at the volcano generated energetic venting, Robertson said.

The size of the tremor peaked between 8 p.m. and midnight, Friday, and slowly declined over the next few hours.

Audible rumblings accompanied by ash venting occurred throughout most of the night with ash fall reported throughout St. Vincent and some areas in Barbados.

Robertson told NBC Radio said that there was a continuous period of the venting of mainly ash up into the atmosphere.

All that material has been destroyed and emitted into the atmosphere, Robertson said.

He further said that his team believes that all the material in the top several hundred metres of the magma chamber has been pushed out and what is now being emitting, is new material coming from deep inside the volcano.

“We don’t know how much of that material was down there that wants to come out,” Robertson explained.

He said that his team has a number of things to get an idea of this, including gas measurements.

“But, currently, we don’t know that and we don’t know how long and how much material still can come up to the top,” Robertson explained.

“I think the next couple of days, the data we collect from collecting the ash and analysing it and also the gas would help us to determine that.

“… I would be surprised if the activity and the amount of activity we have is smaller, is less, than ‘79 kind of scale.

“In other words, if it is going to produce more ash than ‘79 did. It is going to end up being, more than likely, a bigger eruption than ‘79 was.”

Robertson said visibility is poor but his team has accessed satellite imagery, which suggests that there is now a hole at the volcano after Friday’s eruption.

“The other thing is that it seems that a substantial amount of the 2021 dome has gone. It’s been destroy…. All that 13 million cubic metres of material has mainly been destroyed in the activity that we have there so far.”

So far it does not appear that much damage has been done to the 1979 dome, Robertson said.

“It’s almost like you are almost resetting it to how it almost looked before the [explosive] eruption started. That is kind of how up there looks, but [with] an opening on the south-western side where the dome emitted from originally.”

He said that with most of the 2021 dome having been destroyed, this means that the volcano has put out into the atmosphere more than the volume of material that made up the 2021 dome.

The geologist said that the bulk of that material has gone to sea, as has always been the case.

He said that the material that has fallen into the sea was not enough to cause an environmental hazard and is likely to have more impact on atmospheric conditions.

He said that with the volume of volcanic ash produced during the eruption, it is believed that most people in St. Vincent have had some deposit of ash in their community.

Today, Saturday, the volcano is expected to continue to produce ash though there might be some breaks.

Robertson urged persons to put in place measures to minimise the impact of the ash, as he also warned on Friday.

What happened on Friday?

On Friday, La Soufriere erupted explosively around 8:40 a.m., sending ash 29,000 feet into the air, less than 24 hours after Robertson warned that an explosive eruption could take place within 24 to 48 hours.

The government ordered evacuation of the areas closest to the volcano shortly before 5 p.m., on Thursday, and thousands heeded the order, though a handful of residents have remained in the respective communities under evacuation order.

About 2:45 p.m. on Friday, the volcano began pulsing again, followed by a number of explosive eruptions that sent a plume of ash 51,000 feet into the air.

Experts say that the explosive eruptive phase that may continue over the next few days and weeks.

Explosions are expected to be of similar or larger magnitude.

3 replies on “Scientist expecting ‘a bigger eruption’ than in 1979”