More roofs could collapse under weight of volcanic ash 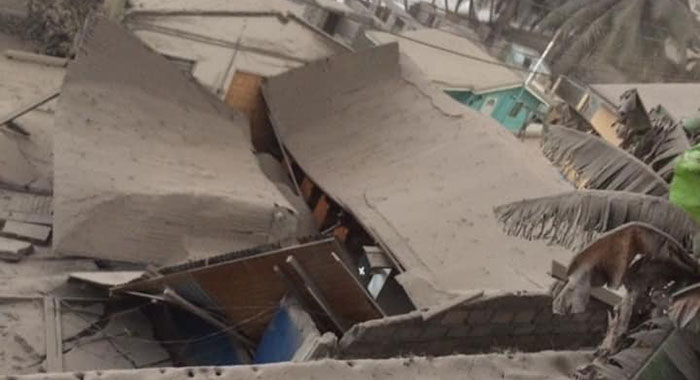 A roof in Sandy Bay collapsed under the weight of the volcanic ash. (Photo: Facebook/Bryan Alexander)

The roofs of several homes and other buildings in the red zone, the area for which evacuation has been ordered, have collapsed.

And, geologist Professor Richard Robertson, the main scientist monitoringLa Soufriere, which has been erupting explosively since Friday, said that more damage to building can be expected amidst the heavy ash fall.

Speaking on NBC Radio at 8 a.m. on Sunday, Robertson said that in the previous 12 hours, there continued to be episodes of tremor at the volcano.

“They last about 20 minutes and there is an interval between them, ranging from 1.5 to 3 hours.”

The periods of tremor seem to be associated, based on visual observation, with periods of explosive activity or enhanced venting.

“And that has been going on for the whole night. It is continuing now as we speak,” he said.

He said that since midnight Saturday, instrument began recording volcano-tectonic (VT), as had been the case before the explosive eruption.

“From what we could see and from all reports, the result of all these explosions and all these venting is that you have had a lot of ash dumped in areas occupied in St. Vincent.”

iWitness News has independently verified that ash had fallen as far south in St. Vincent as Kingstown, the nation’s capital.

Dominic Stowe, a retired Coast Guard officer, told iWitness News that ash has fallen where he lives in Friendship, in southern part of Canouan, located 13 nautical miles from Kingstown

Media reports are that ash had fallen in Barbados and St. Lucia.

Robertson said that a lot of ash had fallen in Belmont, North Leeward, where the volcano observatory is located.

He, however, said there had been reports of ash fall over the country.

The geologist said that while he had spoken about the health issues associated with ash fall, so much ash had fallen that it was causing tree in Belmont to tumble under its weight.

“That is simply because of the ash. That is unfortunate but I suspect that as you go further south, it is going to be less of an impact, but certainly, the environment has been damaged badly by the heavy ash fall and people’s structures and properties could probably become damaged because of the ash.”

iWitness News was present in Byera Hill Saturday afternoon when the branches of several treesbroke off, presumably because of the amount of ash.