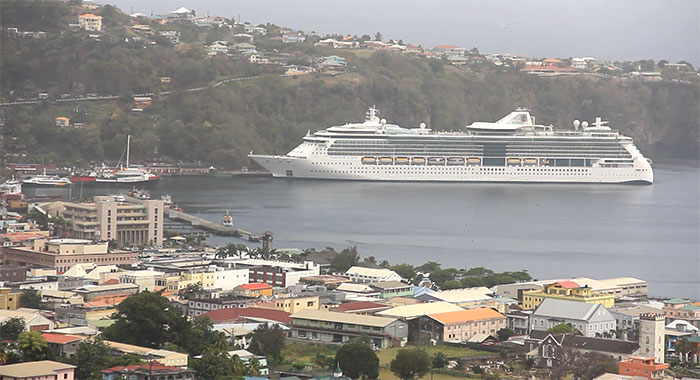 One of the cruise ships that had come to St. Vincent in case persons wanted to evacuate during to other Caribbean islands. (iWN photo)

KINGSTOWN, St. Vincent (CMC) — The St. Vincent and the Grenadines government says it will no longer use luxury cruise ships to evacuate persons from the Red Zone areas of the erupting La Soufriere volcano even as scientists warn that explosions and accompanying ashfall, of similar or larger magnitude, are likely to continue to occur over the next few days with the chance of pyroclastic density currents (PDCs) occurring.

Prime Minister Ralph Gonsalves, speaking on a television programme in Grenada, on Monday night, said that many people have now expressed a desire to remain “home” rather than be evacuated to some neighbouring Caribbean islands.

“The cruise ships are there but today (Monday) we took the decision that because the number [of people to be evacuated[ is not that large to [tell] the cruise ships, thanks and if persons want to go we will charter smaller vessels like those from Bequia … which ply between the islands.

“There are some people who want to go to different countries but it is not a large number. People prefer to stay at home. They said they want to stay at home. I have been around several of the camps and that’s the message,” Gonsalves told television viewers to the programme “Beyond the Headlines”.

He said that the people have said “they want to stay at home, they want to get over this thing”, dismissing reports that persons entering the various shelters on the island must be vaccinated against the coronavirus (COVID-19).

Gonsalves reiterated that the “bulk of the people want to stay” and not be evacuated to other islands, noting that some countries had indicated that while they were willing to take people “they indicated that they would want those persons to be vaccinated.

“There is at least one of the countries which said no, but we will make sure they are PCR tested or rapid tested and we have to quarantine them, because they themselves have to protect their own population and that is understandable, there is nothing untoward about that,” Gonsalves added.

He said “there is absolutely no requirement for anybody who is entering the shelters to be vaccinated or even tested but we are encouraging the testing, we will encouraging vaccination, but certainly we are insisting on the protocols that is to say wear your mask, social distancing…because we have to make sure that while we have you in the shelter and we take good care of you, we don’t want you to come down with COVID and we don’t want you to spread it”.

Meanwhile, in its update, the Trinidad-based Seismic Research Centre (SRC) of the St. Augustine campus of the University of the West Indies (UWI) the pattern of seismic activity at the La Soufriere volcano changed again, with the end of the episodes of high-amplitude tremor two to eight hours apart.

It said on Monday there were three episodes of tremor recorded with one of them late in the evening being described as having “high- amplitude.

“The episodes continue to coincide with periods of enhanced venting or explosive activity,” the SRC said, noting that a reconnaissance of the entire north coast of St. Vincent from Chateaubelair to Georgetown with assistance from the Coast Guard had been conducted.

It said that as a result, observations made indicate that PDCs had descended several valleys on the southern and western flanks of the volcano and had reached the sea at Morne Ronde, Larikai and Trois Loupes Bay.

“Extensive damage to vegetation was noted in an area extending from Larikai Bay to Turner Bay on the west coast. No other areas along the coast had been affected by PDCs but villages located on the eastern flank of the volcano had been affected by heavy ash fall,” the SRC noted.

It said that explosions and accompanying ash fall, of similar or larger magnitude, are likely to continue to occur over the next few days   with the chance of PDCs occurring.