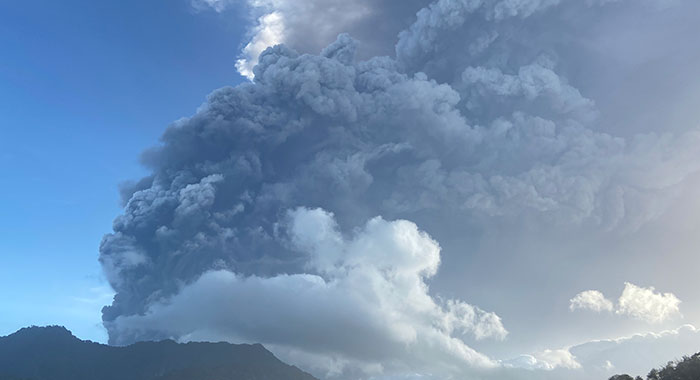 An explosion at La Soufriere, seen from the south west of St. Vincent. (iWN file photo)

Volcanologist Professor Richard Robertson has been very accurate in his predictions about La Soufriere, which erupted explosively on April 9.

However, the volcano proved him wrong when it exploded again on Friday, one week after the initial bang.

Robertson says this illustrates how unpredictable the volcano can be, and reiterated his warning for people to stay out of the Red Zone, where the volcano-related hazards are greatest.

After 41 hours without exploding, the volcano went off at 6:16 a.m. Friday.

Speaking on NBC Radio about two hours later, Robertson noted that he had said that   based on what had been observed, it had looked as if the volcano was out of the period of exploding .

“But, of course, Soufriere don’t like to be told what it is doing. So it proved me completely wrong,” said Robertson, who had accurately predicted last week Thursday, April 8, that the volcano could erupt within 24 to 48 hours.

The volcano erupted at 8:40 a.m. the following day, April 9, about 15 hours after the evacuation order had been given.

He said that prior to the eruption on April 16, there had been 41 hours in which the volcano was “essentially doing nothing” outside of the long period earthquakes, which had been occurring about every 13 hours.

“It didn’t have anything for about 41 hours, so, therefore, we kind of concluded like we were out of the period of having explosions and then this morning we had one,” Robertson said.

“It wasn’t a sort of a big explosion, compared to the ones we had last weekend, but it was big enough to punch a hole into the clouds and put an eruption plume, that, we estimate that, at its highest, probably got up to about 7- or 8,000 metres.”

He said that the eruption provided  “a little bit of ash at the top level”, most of which drifted left out to sea.

“I am not sure if it might blow in…  It wasn’t a lot, it wasn’t sort of a big eruption column,” he said, adding that the amplitude of the signal the explosion generated seems smaller to the explosion on April 13, the 42nd anniversary of the 1979 eruption.

“Fortunately, they are not very big and, therefore, not producing a lot of ash. So, hopefully, they shouldn’t disrupt anything other than the northern parts of the volcano, where the volcano is and where people should move from.

One reply on “With Friday’s explosion, volcano proves professor wrong”