Eruption could produce twice as much more ash

‘… the reality is that we will have to deal with this thing for a little while.’ — volcanologist 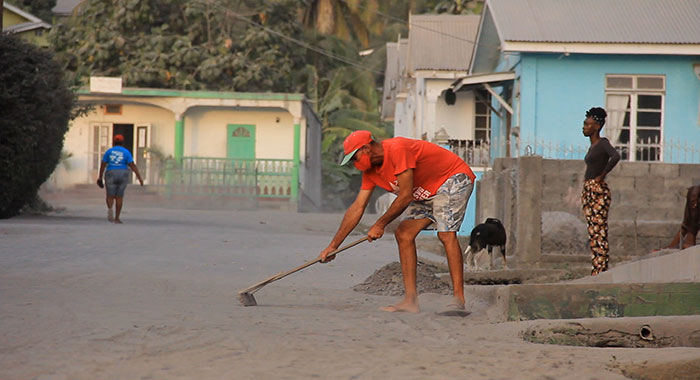 A man heaps up volcanic ash in Barrouallie, on Thursday. (iWN photo)

The ongoing eruption of La Soufriere is expected to be bigger than in 1979 but has only so far produced about one-third of the new material that the volcano did 42 years ago.

“… Even if we have a week of nothing happening, and just earthquakes, just VT (volcano tectonic) earthquakes that we are having now, I don’t think we would say that it is finished, for a number of reasons,” volcanologist Professor Richard Robertson warned on Friday.

Speaking on NBC Radio, Robertson said that persons being affected by the eruption must bear in mind that, historically, the volcano has always erupted for longer than a week.

Further, the current eruption is expected to be more like 1902, which was bigger than in 1979, even as the on-going eruption has only produced one-third of the “new material” the volcano did four decades ago.

Second, the amount of energy that this volcano had at the beginning suggests “it has a lot more down there to come out,” he said.

Robertson said that excluding the 1979 and 2020-2021domes — both of which the volcano has already destroyed — his team estimates that the volcano has only released a small portion of the fresh magma inside.

“… it is only about 20 million cubic metres, if any that has come out as fresh material,” Robertson said.

He said that in 1979, the volcano put out upwards of 60 million cubic metres of material.

And, in 1971, when the volcano erupted effusively, it put out something around 60 million cubic metres.

“So past eruptions which started less vigorously have produced new material that was much more, so to think now, when we have only had a small amount of new material put out that it is finished, I think we would be totally wrong,” Robertson said.

“So we have a little time yet. I know people would love it — I would love it to finish, too. But the reality is that we will have to deal with this thing for a little while. It might be that the way we would have to deal with it is by having to get accustomed to periodic explosions. I hope that is what it is, and explosions that produce ash that goes towards the coast, that goes off coast and drop the ash in the sea, but there is no guarantee that that would happen.

“At the very least, what is going to happen, if it does that, it is really going to damage and destroy a lot of the property and land on the volcano itself,” Robertson said.

As at 9:30 p.m. Friday (local/Atlantic Standard Time), the alert level remained RED, the highest on the four-colour chart.

The National Emergency Management Organisation (NEMO) said 87 shelters with 4,166 occupants were activated and  3,718 were being housed in private shelters.

A total of 1,459 families have been displaced so far.

The National Emergency Operations Centre continues to be fully functional and operating 24 hours.

4 replies on “Eruption could produce twice as much more ash”