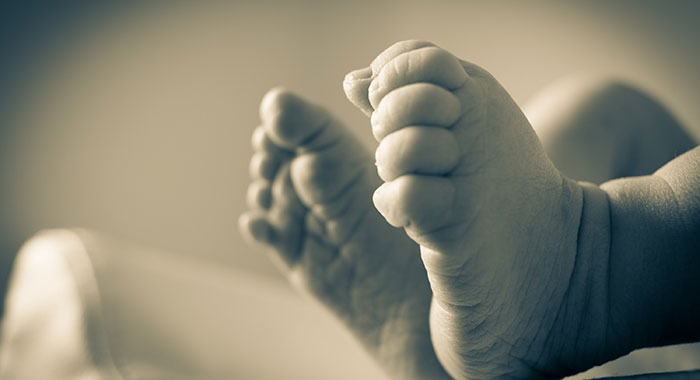 The woman, who delivered her baby outside the Maternity A ward of the Milton Cato Memorial Hospital, shortly after midnight Saturday, says that nurses had refused to attend to her without knowing her COVID-19 status.

She said that with the result of her COVID-19 test, administered that night, still pending, the nurses did not respond to her after she told them that she felt as if she was about to give birth.

The 32-year-old woman, who was having her third child, told iWitness News today (Monday) that the baby was due on May 5.

She, however, said that her two previous children were either born two weeks before or two weeks after their due dates.

The woman said that when she and her boyfriend arrived at the hospital sometime after 11 p.m. on Saturday, the staff told her they would not attend to her until they know her COVID-19 status.

The woman told iWitness News that she and her boyfriend were left sitting on a bench outside the ward while waiting for the COVID-19 test result.

She said that as her labour pains became more intense, she rang the bell to summon the nurses.

The nurse that answered the door told the woman that she had to wait for the COVID-19 test result before being permitted entry into the delivery room.

The woman said that her boyfriend began making noise and the nurse went back to her station, behind the locked door.

The woman told iWitness News that she was on the bench and felt as if she wanted to release herself, and it was then that her water bag broke.

It was not until then that the nurses rushed to assist her.

By then, the woman had positioned herself with her back against the bench and her buttock on the ground and had given birth there.

“I feel upset about it because I never went through that before,” she told iWitness News.

“I am disappointed with the nurses,” she said.

And, even after the woman had given birth in those circumstances, it took a while before the nurse attended to her.

The woman remained seated on the bench for what she said seemed like 15 to 20 minutes after the nurses had rushed into the ward with the newborn baby.

It was not until then that they attended to her.

“I was sitting there with the long [umbilical] cord hanging out of me,” she told iWitness News.

She said that doctors did a CT scan of the baby’s head and said that the child is OK.

As for the mother, she said she is feeling stomach pains that are more intense than after her first two deliveries.

The woman also told iWitness News that she feels “bad” that a video that her boyfriend took of her immediately after the birth has gone viral on social media.

“I feel bad about the video with my private exposed. If it was my face alone,” she said.

She told iWitness News that her boyfriend said that he sent the video to one of her relatives so the relative could see what had happened and that person might have circulated it.

In the video, an angry-sounding male voice, says, in dialect:

“This is where [she] had her baby. [She] came to the clinic so long; she was here waiting, I was calling the nurses. My child born on the ground there, dropped on its f***ing head, you understand?

“Sorry for the bad word, I am going to put this live on social media. The woman has given birth; they took the baby. Look the umbilical cord coming out of my woman there. I don’t want to show her face and look, up to now no one is paying her any attention.”

However, the woman’s face has been visible from the time the video began to when the man said he did not want to show her face.

“None of them is studying her and when I talk, they tell me I must cool down myself. How could I cool down myself in a situation like this? Suppose something happen to my child. Look where it dropped on the concrete there. Concrete me child born on and drop a ground there.”

“Look at where my child born and look where my woman is still, over 15 minutes now and none of them studying she.”

In a terse statement on Sunday, Cuthbert Knights, permanent secretary in the Ministry of Health, Wellness and the Environment, said that the mother, baby and the baby’s father “have been assessed and are stable and without any immediate signs of any adverse effects due to the mode of delivery.

He said that the Management of the Hospital Services Programme was conducting investigations “into the events surrounding this unfortunate and unusual incident with an aim to implementing corrective measures where necessary to ensure that there is no repeat of such an incident”.

Meanwhile, the mother told iWitness News that the baby, a girl, weighed in excess of six pounds.

One of her sisters has suggested the name, “Miracle”.