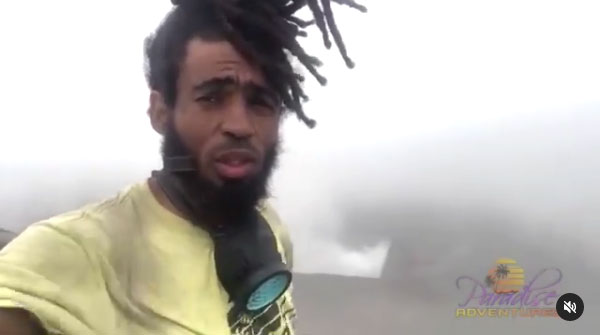 KINGSTOWN, St. Vincent (CMC) — The lead scientist monitoring La Soufrière volcano, Professor Richard Robertson, Monday described as “dotish” (stupid) and not an act of bravery, the decision by a man to climb the erupting volcano on Sunday.

“It is absolutely foolish… it is absolutely dotish to do that. People talk about bravery  and to me somebody is brave when you are aware of the risks that you put yourself through because of some positive job or they need to contribute to society in a fundamental way and you still take the action to save your family or something like that,” Robertson told listeners to the state-owned NBC Radio.

A video has been circulating on social media showing the man, later identified as a “our guide”, going to the summit of the volcano which has been erupting since April 9 and has forced the evacuation of more than 16,000 people in the Red Zone area.

In the video, the person is seen, without a face mask, taking video selfies at the smoldering crater and describing the scene, while a strong wind blows, and steam rises from the cauldron.

He also captures video of a person climbing.

“I would suggest that action like that is not sensible. At this time I think for me, people in St. Vincent need to be brave, be brave to what we have to face. We have to face a country in which we will have tremendous devastation because of the volcano

“Going up the mountain at this point in time where you could be killed or where you could get people with you killed or you could inspire people who saw you that is a sensible thing to do the same thing, that is not brave, that is dotish, that is what I would call it. I am sorry if I offend anybody with that type of language,” he told radio listeners.

On Sunday, the volcano continued its pattern of explosions with the Seismic Research Centre (SRC) of the University of the West Indies (UWI), saying that the episode of continuous seismic tremor generated by explosive activity at La Soufriere, lasted until about 9 p.m. (local time/Atlantic Standard Time).

In its latest bulletin, the SRC said that following this, small long-period and hybrid earthquakes started to be recorded again, at a rate similar to before the explosive activity.  It said that this rate dropped significantly during the early hours of Monday.

“No volcano-tectonic earthquakes were recorded in the last 12 hours.  One rockfall was recorded, at 1:39 a.m. Rockfalls can be generated by a growing lava dome, but this cannot be confirmed without visual observations,” the SRC said, noting that the continuous GPS (Global Positioning System) network has shown a change in horizontal and vertical movement since the initial depressurization noted immediately following the April 9 explosive phase.

It said that the continuous GPS network is used to track changes in ground shape on and around the volcano.  As magma moves beneath the volcano, changes in pressure cause the volcano to change shape (inflate/deflate).

“These changes may suggest magma influx from deep within the sub-volcanic system, however more investigation is needed to confirm this interpretation,” the SRC said, adding, “the volcano continues to erupt. Its pattern of seismic activity over the last few days is typical of the growth and destruction of lava domes”.

Robertson told radio listeners that the volcano in its current state can erupt explosively without warning.

“Anyone on the volcano at the time is at risk of dying horribly from blunt trauma to the body, from excessive burns, and from asphyxiation. Anyone at the summit as you were today will certainly be killed if it has one of the kinds of eruptions that it had on the very same day that you visited.

“Stop putting yourself, your co-hikers, and potentially the search and rescue team that would come to get you if something happens. This is neither brave or useful but simply dotish.”