The double whammy of COVID-19 and La Soufriere 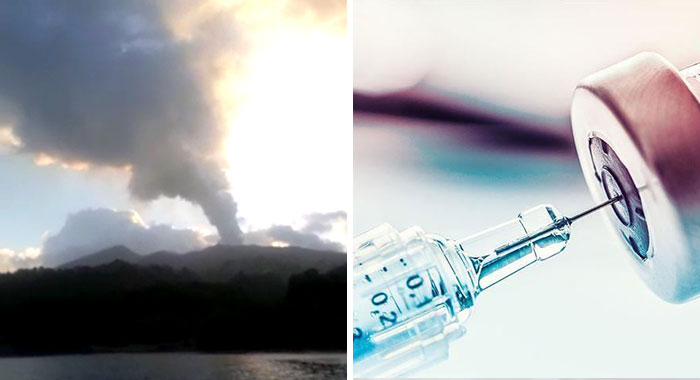 The thunderous first explosion of La Soufriere on April 9 should not deter us from fighting our other natural enemy, COVID-19, a lethal virus which has grown potentially more deadly with the packing of several thousand volcano refugees in various shelters, small guest houses, and the homes of family and friends.

Like all viruses, COVID-19 spreads best indoors where there is little moving air or expensive ventilation equipment. This is especially true of guest houses and private residences with their low ceilings and windows that are shut tight at night.

Fortunately, our government has been able to procure relatively more life-saving vaccine doses — 65,000 and counting — at a much quicker pace and in relatively larger amounts than many of the world’s most powerful countries. Indeed, we are now so awash with the falsely vilified AstraZeneca (AZ) vaccine that we have more than enough to treat our most vulnerable people, the elderly with comorbidities like weak immune systems or heart disease.

Many people, myself included, doubted our ability to obtain any COVID-19 vaccines this year. This negativity was tempered by a concern, one I also shared at the time, about the effectiveness and safety of vaccines allegedly rushed to market by emergency government legislation before they were properly tested.

But that was back in early January and much has been learned in the past three months.

Few have praised the speed at which our government has obtained so many doses of vaccine. Conversely, both its friends and foes would be damning our leadership if we had few or no doses as of this date ignoring that many larger and more influential nations are in exactly that state. Such is the viciousness of the politics of personal and national destruction in our deeply divided country.

It is, therefore, more than disconcerting that there has been so much vaccination hesitancy or even outright anti-vaxxing ideology in our land when millions of people are lining up day and night in far wealthier countries eager to be injected with any available vaccine. Most will be inoculated with the proven AZ medication, a vaccine whose alleged adverse effects are almost non-existent and whose efficacy in preventing COVID-19 deaths is 100%. No wonder that its developers plan to deliver up to 3 billion doses across the globe by the end of 2021, much more than any other manufacturer.

Sadly, the former Speaker of the House of Assembly, Jomo Thomas, has brushed all this aside by calling the use of AZ, “a medical experiment” when the most recent evidence from the European Medicines Agency, a decentralised and independent unit within the European Union (EU) responsible for the EU’s scientific evaluation, supervision and safety monitoring of medicines, is that there was the death of 18 people from a “very rare” blood clotting disorder “possibly” linked to AZ among the 25 million people vaccinated in the European Union and Britain, or less than one person for every million vaccinated.

What such data and the widespread and otherwise propitious use of AZ around the world should tell any rational person is that there is a much higher risk of dying in a traffic accident, drowning at sea in SVG, or being burnt alive by La Soufriere than there is of being killed by AZ. Which sensible person would ever opine that no one should ever cross the road, ride in a van, or go to beach because this might be a death sentence?

Though our scepticism about vaccines and the testing linked to them has several causes, including mindless fear and scientific and logical illiteracy, it has been cynically exploited by those eager to score a few cheap political points during these difficult times.

In wickedly preying on the worst instincts and irrational fears of our people, powerful interests, including union bosses and opposition politicians, have forgotten that the first duty of honest and patriotic leaders is to protect the well-being of their followers.

When opposition leaders say that they have been or will soon be inoculated with AstraZeneca in one breath while boldly declaring in another that no Vincentian should be compelled to accept vaccination or even testing for contagious illness, they are deliberately encouraging their supporters to reject the biologically grounded drive, rooted in collective survival of any bounded group of people (or other animals), to protect themselves and those around them from some deadly threat.

Equally problematic is the assertion that it would be unconstitutional for the government to compel or even cajole people to be tested or vaccinated.  The legislation governing the mandatory administration of vaccines to SVG children is the Immunization of the Children Act of 1982, a piece of legislation that has been amended over the years and which has never been challenged by our now growing cohort of mindless anti-vaxxers and their power-hungry upholders.

Although this act does not include adults, the Prime Minister made it crystal clear that, “But even without a law specifically being passed, the[re] are common law duties [of care and protection] through common law obligations. The Constitution permits it [testing and vaccination], the Public Health Act permits it, administrative law permits it, the Public Health Act, and the declaration of a public health emergency even makes it more compelling.”

As for the issue of who to test and/or vaccinate, as in other countries, this should include all public and private workers who come into close physical contact with the public: bus drivers, conductors, police, health care workers, and those essential civil servants whose illness or death would cause considerable harm to the functioning of government.

The need to increase testing and vaccination grows more urgent by the day as the eruption of La Soufriere has created a perfect storm: the dangerous packing of thousands of often mask-averse climate refugees in evacuation facilities, cramped guest houses, and the crowded homes of family and friends.

For once, let us stop all this destructive “civil rights” posturing and anti-patriotic political grandstanding and pull together as a united people.