‘Hundreds of millions of dollars of assets at risk’ — PM 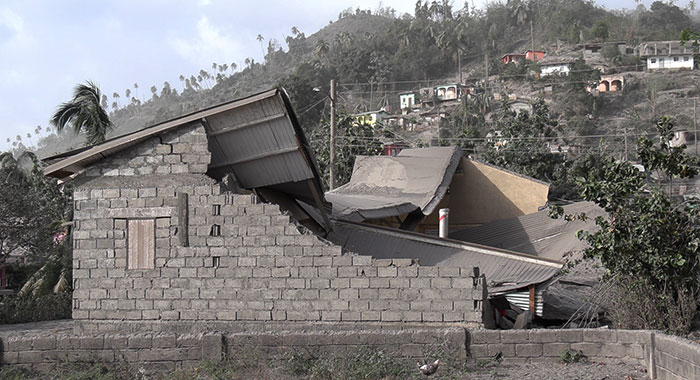 The roof of this house in Fitz Hughes collapsed under the weight of the volcanic ash. (iWN photo)

The government of St. Vincent and the Grenadines has not begun to calculate the cost of the damage caused by the eruption of La Soufriere.

“What I can tell you about, in terms of the assets at risk, there are hundreds of millions of dollars of assets at risk in the red zone in the north east and the north west and in the orange zone because we have a lot of agriculture as we go higher up. Agriculture is shot through, completely,” Prime Minister Ralph Gonsalves told journalists at the weekend during a tour of the northeast of St. Vincent.

“There is nothing there. Trees are being denuded — breadfruit, coconut, fruits trees, then other forms of fruits and vegetables are covered; yams, dasheen, tannias, root crops of one kind or another, those are covered over in ash,” he said.

Gonsalves said that further north, a lot of animals have died, “and then houses, especially for the poor”.

The prime minister further said that he had been advised that there are two areas where the roads and one or two bridges have been badly affected.

“So some public infrastructure, private infrastructure, agriculture, animal husbandry, and then, of course, if people can’t work for a long period of time, they have to provide a social safety net support. It’s a high operation,” the prime minister said.

He said he had spoken with Minister of Agriculture Saboto Caesar who went up with some other persons.

“Way in the north, in the northeast, above the Rabacca River, the agriculture is all gone. You have to start from fresh, and that means you have to clean and then you have another 10 month, a year, because some short crops [are] going [to] take, four months, five months, six months; trees will take a little longer and so on and so forth. It’s a major, major operation ahead of us.”

The prime minister said that the country’s building code has been strengthened and the road network has been improved over the last more than 20 years.

“And as a consequence, houses have gotten better, bigger, people’s living standards have risen,” Gonsalves said.