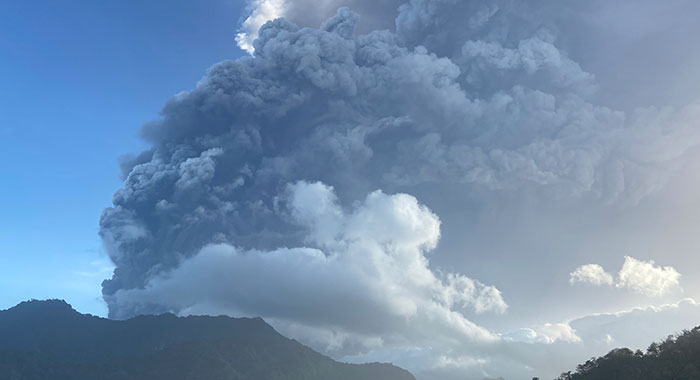 La Soufriere has been erupting since April 9. (iWN photo)

UNITED NATIONS (CMC) — St. Vincent and the Grenadines Prime Minister Ralph Gonsalves has called on the international community not to forget his volcano-battered country as the United Nations addressed the issue of enhanced cooperation between itself and regional and sub-regional organisations.

“Please help St. Vincent and the Grenadines in its midnight hour of need,” Gonsalves told the United Nations Security Council on Monday.

La Soufriere has been erupting since April 9, forcing the evacuation of thousands of people and destroying houses, farms and livestock on the island.

Gonsalves told the UN Security Council meeting that the issue of cooperation is of “immediate relevance to my country in the context of a massive natural disaster against the backdrop of the many sided challenges of the COVID-19 pandemic and the predictive Atlantic Hurricane Season that begins in six weeks’ time”.

He said that for the past 11 days the island has been in the “throes of a series of explosive volcanic eruptions” and as a consequence nearly one-fifth of its population has had to be evacuated to safer areas.

“A monumental challenge of humanitarian relief including security considerations and recovery and reconstruction face us. Without effective cooperation between our country, the United Nations and our regional, sub-regional organisations, our life and living would be wholly unbearable”.

Gonsalves said without an enactment of this cooperation, the relief effort would be stymied “and the prospects for our recovery and reconstruction would be dismal”.

He said the UN and its agencies have been actively at work and the personal leadership of Secretary General, António Guterres, has been “outstanding”.

He said further CARICOM, the sub-regional Organisation of Eastern Caribbean States (OECS), the Barbados-based Regional Security System (RSS), the Association of Caribbean States as well as Bolivarian Alliance for the Peoples of Our America (ALBA) have been at the forefront “with their magnificent efforts.

“Still much more is required to be done. Across our land, the faces of men, women are strained and anxious. They are hurting badly. The global community is being summoned to action to our aid in the name of humanity and in accord with the United Nations Charter.

“The global community cannot allow itself to make haste slowly,” Gonsalves said, noting that regional institutions in concert with the UN are often best suited to facilitate the specific settlements of disputes through mediation, confidence building, observation and verification missions and other measures to promote stability, build trust and create and environment conducive to development.

Gonsalves told the UN Security Council that any dispute that is likely to endanger international peace should first be addressed through these peaceful means with the participation of relevant regional arrangements as enshrined in the UN Charter.