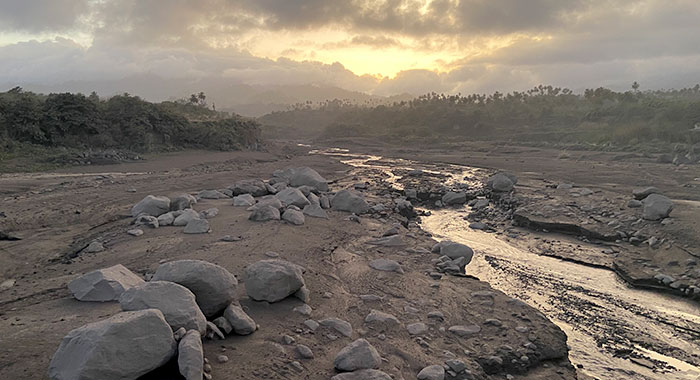 KINGSTOWN, St. Vincent (CMC) — Volcanologist, Professor Richard Robertson is predicting another volcano-related hazard for the people of St. Vincent and the Grenadines, already dealing with the effect of an erupting La Soufriere volcano.

He believes that as the rainy season approaches, the island could face another, potentially more destructive, natural hazard resulting from the volcano that has been erupting since April 9 and has spewed millions of cubic metres of volcanic material into the atmosphere.

Much of the ash has fallen across St. Vincent, especially communities in the north, closest to the volcano.

Speaking during his daily update on the state-owned NBC Radio on Tuesday, Robertson said that one of the most significant observations over the review period, was a lahar or mudflow around 4 a.m. (local time/Atlantic Standard Time).

“It was recorded at the station in Bamboo Range which suggests to us that a lahar, a mudflow, came down one of the rivers … on the southeast. I suspect it might be Rabacca and that’s why we picked up the signal,” Robertson said.

A lahar is a violent type of mudflow or debris flow composed of a slurry of pyroclastic material, rocky debris and water. The material flows down from a volcano, typically along a river valley, and is extremely destructive, flowing tens of metres per second and tend to destroy any structures in their path.

Robertson said that there is a lot of deposit at the summit of the volcano and as the rainy season approaches, these mudflows tend to become more pronounced.

“You are going to have flooding of lower areas, it is going to damage houses and probably bridges and things like that,” he explained, adding that any of the river valleys on the volcano could be impacted by lahars.

“Because, essentially, lahars are rivers that come down. As we say in St. Vincent, ‘the river come down’. And in this case, when the river comes down, the river’s bringing all the blocks and pieces of vegetation and everything that the volcano has destroyed at the summit and rested on the ground.

He said that lahars are possible in any of the valleys that drain the volcano.

Robertson said that this applies to places like Rabacca and all the valleys on the volcano, but also places in the south, where there was a lot of ash.

“When the rain falls, all of that ash is going to come off and go into the drainage system, go into the rivers and they could, potentially, cause some element of damage.”

The volcanologist, who is heading a team of scientists from the Seismic Research Centre (SC) of the University of the West Indies (UWI), said that this is a secondary effect of a volcanic eruption.

He said he would expect the more significant damage to be probably on the volcano itself because there are large blocks and fragments of material as well as trees that have been killed.

“But even as you come south in some of the river valleys, you have had a lot of ash so you are going to have a river that potentially has a lot more material in it to cause damage. So it is something you have to look and be aware of.”

He said that people who are in areas or where the road crosses the river must be especially vigilant.

“If rain was falling in the mountains, you have to be conscious that you could have a lahar. If you are going into an area that has a river valley, you have to be aware of the potential for this kind of hazard to happen now because you have so much material in the land,” Robertson added.

One reply on “Another volcano-related hazard as rainy season approaches”