Scientist warns volcano could erupt again within a week 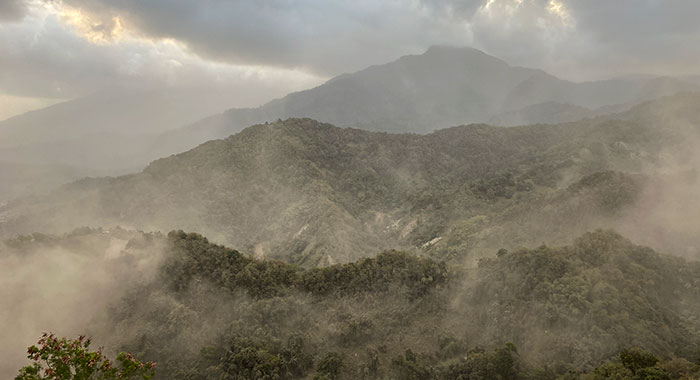 KINGSTOWN, St. Vincent (CMC) — Professor Richard Robertson, the lead scientist monitoring La Soufriere, on Tuesday, warned that the volcano could erupt explosively again over the next seven days or so, if the current activities continue.

“As we’ve said before, the volcano seems, in a sense, to be trying to grow a dome and it doesn’t succeed because it then has an explosion that destroys that dome. We expect at some point it might actually succeed and you may have a dome there. We don’t know if this week is the time it happens but if it doesn’t, then you, probably are going to have an explosion,” Robertson said.

La Soufriere has been erupting since April 9, but the eruptions have gotten more infrequent, moving from every 12 hours or so, to over 41 hours apart in the case of the last eruption, on Sunday.

Robertson said that during the review period ending Tuesday morning, activities at the volcano, essentially continued as has been the case over the past few days, with the addition of having mudflows.

Seismic activity continued the pattern established after the explosive activity on April 18, meaning that there continues to be small long periods and hybrid earthquakes and earthquakes that are not likely to be felt.

There have been two rock falls over the period, no volcanic tectonic earthquakes or tremors over the last 12 hours, Robertson said.

He said that apart from the long period and hybrid events, which usually indicate that magma is moving and a possible period of dome growth, as has been seen in Montserrat, the only major event was, actually, the rock falls.

“It is likely that as the dome grows, bits and pieces of it fall off and it generates a signal that we are having a rock fall. That’s possibly some of the reasons you get rock fall,” Robertson said.

He explained that a rock fall signal is essentially a seismic signal that is generated when a large rock, a large piece of volcanic material, falls off the mountain and moves down the mountainside.

“And, as it does that, it generates a vibration that the seismic instruments record,” Robertson said, adding it is possible to have rock fall anywhere in a volcano that is not related to dome growth.

“But the fact that you have them and you are beginning to have a few more, … is another indicator that you probably have the volcano growing or trying to — well, you have some sort of growth going on at the summit and that is a result of it, quite apart from the seismic signals that we are having.”

Regarding the question of whether there has been a shift in the trend of explosions seen early, Robertson said:

“There’s some element of a sort of a pattern we don’t quite get a handle on. But, essentially, the main thing is that the gap in between the explosive event and the relatively quiet period is increasing.

He said that the volcano might succeed in building a dome, in which case “the chances of it capping the system, at least for a longer time would be there and you might, instead of having the explosion, have validation that you actually have a dome there.

“And then it may take a little bit longer because it has more material to get out of the way if it is going to go explosive,” Robertson said.