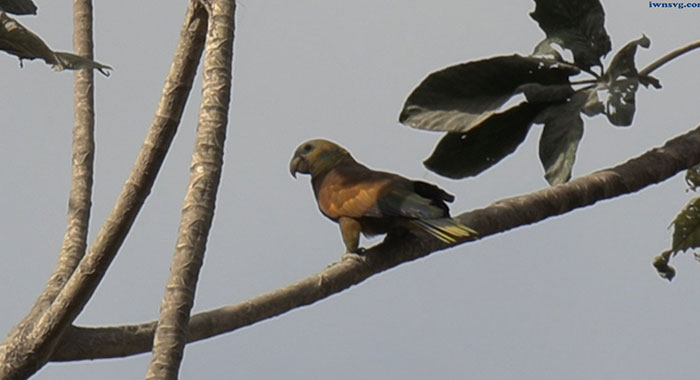 A Vincy parrot in Congo Valley on Saturday. (iWN photo)

A farmer in Congo Valley has expressed concern for the wellbeing of the national bird in the area, amidst the ongoing eruptions of La Soufriere.

Congo Valley, one of the areas in St. Vincent with a large population of the endemic parrot – the scientific name of which is amazona guildingii – in the wild.

iWitness News visited the valley on Saturday, where Grant Connell, a farmer and lawyer, pointed out a pair of the parrots perched in a tree for a relatively long period of time, in such close proximity to humans.

“I don’t usually see them staying in one place for so long,” Connell said.

“I have been asking my friends overseas who know about these things … if we should create a feeding platform for them because if you look around, there is not much for them to eat,” he said.

Connell told iWitness News that about a week before the eruption, one of his workers found two dead parrots in the river that runs through his farm.

“I don’t know if they fell out of their nest or what. Every time I come up to the farm, I usually come to the back where the parrots are — hundreds of parrots in the tree behind me. I know the Forestry come and check on them sometimes. But, about a week before the eruption, I found one or two dead ones, little ones in the river.

“Today, we are seeing them flying around so my concern is: how has the eruption affected them?”

La Soufriere has been erupting explosively since April 9, presenting a hazard to the birds directly, through loss of habitat and the destruction of food sources.

“… hopefully, the Forestry comes up and checks on them soon,” Connell said.

He said that the parrots used to come to the farm and eat the various fruits grown there.

“… we were going to set up a little platform with different fruits so that they can get something to eat but we didn’t really want to interfere.

“So hopefully, the guys from the Forestry would come and check it out soon.”

He said that the birds are usually in a fig tree on the farm but they are coming closer and closer to his farm shed.