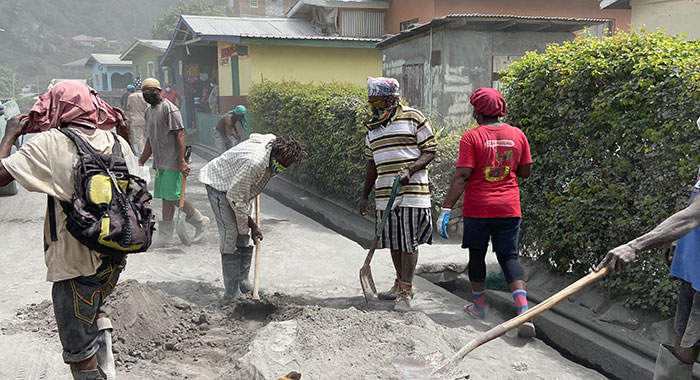 Residents of Spring Village clean up volcanic ash in their community on Sunday,April 18, 2021. (iWN photo)

The United Nations, on Tuesday, launched a US$29.2 million global funding appeal, aimed at raising funds to help St. Vincent and the Grenadines meet its immediate needs after the April 9 eruption of La Soufriere volcano.

“This is an effort to protect the most vulnerable people that have been displaced, or the affected people by this crisis in St. Vincent and the Grenadines and also the effect that this crisis is having in all their neighbouring countries,” Didier Trebucq, UN Resident Coordinator for Barbados told a UN press conference.

Trebucq told the virtual briefing, which was also attended by Prime Minister of St. Vincent and the Grenadines, Ralph Gonsalves, that the objective of the fund is “to scale up the humanitarian assistance and to initiate, as soon as possible, the recovery”.

He was speaking after touring the worst affected areas in the north east of St. Vincent along with Gonsalves, on Sunday.

Trebucq said that in some places, the volcanic ash was 10 to 15 inches deep and assessed some areas as “apocalyptic”.

“I really want to use this word apocalyptic and desolate,” he said, adding that many roofs have collapsed, including that of the school in Sandy Bay.

He noted St. Vincent’s reliance on agriculture, adding that crops are all devastated in that part of the island and that animal husbandry has been affected “very, very heavily.”

“And this is going to have a critical impact on the economic sector, of course, of the island,” Trebucq said, adding that the impact of the eruption on thousands of people is really undeniable.

“… following this visit, I can only say that those images would really stay engraved in my memory for many, many years.”

He said that the UN has concluded that the immediate humanitarian needs are very critical for 15,000 people — around 15% of the population — who have been displaced.

“And those people have been evacuated from the northern areas of the island, which has higher indices of poverty, hence a greater degree of vulnerability,” he said.

The UN official, however, said that the vast majority of the population of the island has been affected as the people who did not evacuate are also hosting evacuees, thereby resulting in greater socioeconomic stress.

“So this is really a situation that is going to be not really sustainable following several weeks, even though the humanitarian assistance is growing satisfactorily at this moment.”

He said the appeal was being launched because of an urgent need to scale up and sustain the assistance “because the vast majority of the people in this island have been affected”.

He said that two out of the five hospitals had to be evacuated and this is really putting even more pressure on the remaining health system.

“And there is still a lot of uncertainty,” he said, noting that the eruption is continuing and tremors were felt that morning and there was another eruption on Sunday.

“So it’s very clear that this uncertainty will result in in many months, in probably over a year, to recover the task for the ashes clean-up is enormous,” Trebucq said.

He said the logistics will be a huge challenge and there are some areas to where people most likely may not be able to return.

“So there is the whole issue of settlement, resettling people, repairing homes, repairing community infrastructure…”

Trebucq said the interventions and the funding appeal document is divided among eight sectors to provide access, as quickly as possible, in the most sustainable manner to water and hygiene and sanitation.

The appeal aims to continue to provide access to food through different modalities — food kits or cash vouchers — through the government mechanism that is in place, as well as supporting the livelihood of the families over the medium term.

Point number three seeks to provide shelter, Trebucq said, noting that many people are in shelters.

“…we need to look at the essential needs of the next few weeks and months, but also looking at the housing, transition to housing and long term needs such as repair of houses, community infrastructure, or resettlement of families.

“So those three first areas — water, food and shelter — are definitely one of the top immediate priorities”

The appeal will also look at the support for the delivery of education, so that it is not disrupted.

Students in SVG have not returned to the classroom for the year, because of COVID-19, and schools were scheduled to reopen on April 12, but the volcano erupted three days before that, forcing them to remain closed.

“I would like to recall that many of the evacuees are sheltered in schools,” Trebucq said, adding, “So we need to look at this issue, of course, very specifically”

Trebucq also spoke of the need to strengthen the health services to prevent further spread of COVID-19 and address environmental health concerns related to the volcanic ash.

Point six, relates to the clean-up of the ash across the island, including with equipment and expertise.

And, seven, is related to the protection of the most vulnerable, “who are currently in a precarious condition but we may not be able to return immediately.”

He said this is about preventing gender-based violence, ensuring child protection amongst others.

The final point is logistics.

“There is an immense logistical challenge for the delivery of the aid currently, especially people who are still in the Orange Zones, and to have access but also the repairs for the clean-up

“So, it is our intention today with Prime Minister Gonsalves to make a call for action,” Trebucq said, adding that SVG was dealing with a crisis within the COVID crisis.

“And we fear the risk of a spike of COVID cases with people in shelters. This is a very complex situation, they could be more eruptions; the situation can deteriorate very rapidly.”

He further noted that hurricane season begins in about six weeks, and is forecast to be above average.

“So we need to avoid a multiple crisis scenario. Greater international support is needed. This will allow for us to rapidly scale up, as I said, and support the government to respond to this growing humanitarian crisis that is unfolding before our eyes, so we have no time to lose, and along with my colleagues from the UN team, from Barbados, and the Eastern Caribbean really make, alongside Prime Minister Gonsalves, an urgent appeal to ramp up solidarity to support St. Vincent and the Grenadines and other neighbouring affected countries, and really call for an immediate contribution to this UN Global funding gap,” Trebucq said.