Volcano in phase of highest chances of deaths — geologist 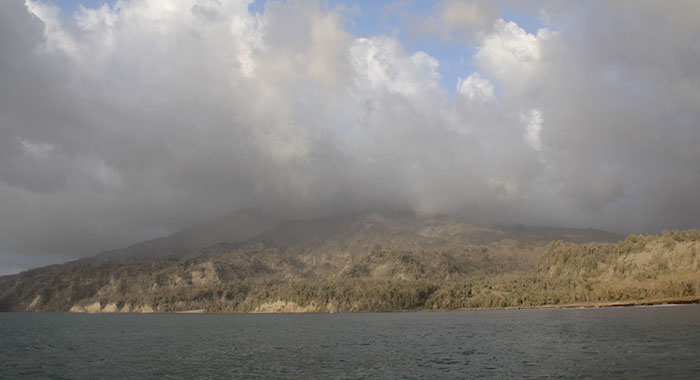 La Soufriere is currently in the phase where the most deaths during volcanic eruptions occur, head of the monitoring team, Professor Richard Robertson warned on Tuesday, as he cautioned persons to view volcanic activity from safe distances.

Robertson said that persons should, specifically, stay away from Rabacca, an area with a dry river that offers a commanding view of the volcano, which has been erupting since April 9.

“The first thing I would say is that the volcano hasn’t stopped erupting yet and that everywhere in the Red Zone is extremely dangerous, even during these lulls because we don’t know how long the lulls are going to be,” Robertson said in his daily update on NBC Radio.

“The pattern seems to be like that now, but the volcano has shown that it can change its pattern within minutes without any other indication,” he said of the volcano, which last exploded on Sunday, after a 41-hour lull.

“Once volcanoes are erupting as they are now, and once they have shown that they have a potential to be explosive and could be dangerously and violently explosive as this one has shown, it really makes sense for you to stay away from them, even if it looks now like there are periods when there is very little happening.”

Robertson said that the volcano could erupt again within a week, whether or not it succeeds in building a dome, as he said it seems to be trying to do.

He said that even if it seems that the time between explosions is increasing, “the chances of something happening within a certain time frame, that is, with the current pattern.

“The pattern could change before I finish speaking and suddenly you have a different thing.”

He said there is a certain element that experts know but there is also a lot happening that they do not quite understand or know.

“And, therefore, we give, as best we can, projections as to what will happen and in that regard, it means, therefore, that people need to be very careful, need to be conscious that red is still red; it’s still dangerous,” he said, referring to the Red Zone.

Robertson said that while there is the current period of “apparent quiescence”, where the volcano appears not to be doing much at the surface, there is still a lot of shaking at the volcano.

“So it is doing a lot. It (magma) is trying to get out. And we don’t know exactly when it will get out, even though it seems like it has a pattern,” said Robertson, who has said that he believes the volcano has only emitted one-third of the new material it will produce during the current eruption.

“So, don’t be fooled. It has been shown from studies that these are the periods when people are most at risk and the chance of people being killed are highest.

“When the volcano goes into this sort of pattern where it seems not to be doing very much, people tend to drop their guard and they do things that they shouldn’t be doing and they get caught out, even though they have been evacuated before.”

Robertson said there is no reason why people can’t see the volcano safely when it is doing “its spectacular things like explosions and be unsafe”.

He said there are plenty of vantage points on both the leeward and windward sides of St. Vincent and people do not need to go to Rabacca to see that.

“Rabacca is a bad idea, extremely bad, because Rabacca is one of the primary paths for pyroclastic flows to come down,” he said, referring to fast-moving super-hot masses of volcanic material that flow down valleys during an eruption.

He said Rabacca is also a primary path for lahars, adding that if these mudflows are big enough, they will not necessarily be confined to the valley, which is under the bridge.

“A proper lahar comes down; it doesn’t need a pyroclastic flow to do that. It will take out all of that and take out the sides and the Rabacca will re-establish its full extent.”

He said that the Rabacca does not begin at the beginning of the road at the bridge.

“The Rabacca starts all the way back, about 2 or 200 metres, so it is very wide. When you think you’re standing on the side of the Rabacca, you are actually in the Rabacca.

“And if you are in the Rabacca, first of all, a mudflow could take you out. And if the mudflow then didn’t do the damage, if it is erupting, it then goes into an explosive eruption, you are caught in a mudflow, a pyroclastic flow could come down and then that will finish you,” Robertson said.