In less than 3 years, volcano shows PM’s critic had a point 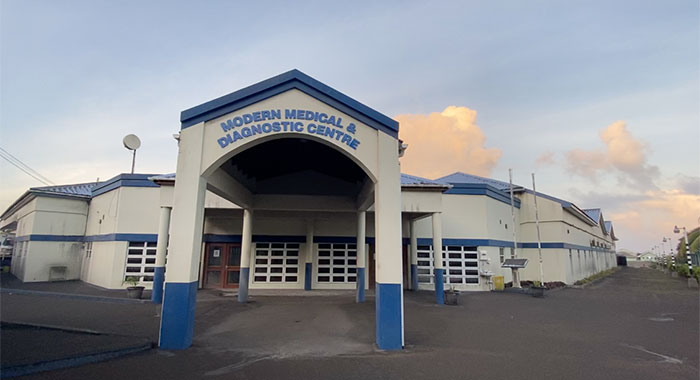 Ash covers the compound of the Modern Medical and Diagnostic Centre in Georgetown on April 13, 2021. (iWN photo)

The Modern Medical and Diagnostic Centre at Georgetown, which has been closed since the explosive eruption of La Soufriere on April 9, will be cleaned and reopened.

The MMDC, a gift from Cuba, officially opened on July 2, 2018 — 11 years after construction began.

The Unity Labour Party government built in the centre in the volcano red zone, amidst criticism that a volcanic eruption would force it to close, and that the bulk of the nation’s population live in the south of the island.

Now, less than three years after the centre opened, it has been closed for two weeks and counting amidst the eruption of La Soufriere, which experts say could last for up to a year.

Specialist services such as cancer treatment and dialysis, which the government provided only at the MMDC, have been transferred to the main Milton Cato Memorial Hospital in Kingstown.

Construction of the centre began the year after the National Emergency Management Organisation published a volcano hazard map, which said that the Red Zone represents an area of “very high hazard” and is expected to experience maximum damage in the short term, and is the zone where all hazardous events have their greatest influence.

“It is defined by the zone of expected total destruction from pyroclastic flows, surges and mudflows and by the zone of maximum expected damage from all projectiles. This zone is likely to experience more than 30 cm of ash. During the course of an eruption this zone would be unsuitable for human habitation,” NEMO said in 2007.

Speaking on NBC Radio on Friday, Gonsalves said that MMDC will just be cleaned up, like everything else.

“The diagnostic centre will be cleaned up,” he said.

“You know, what amazes me, some people who say this shows that you shouldn’t ah build it there. Well, what about all the thousands of people who live in the Red Zone and in the Orange Zone? What happened, they must migrate?

“What about the investments we put in the water systems — $23 million in Jennings and at Perseverance and in Fancy and in Sandy Bay? What we must do, don’t have them there? What about the schools? You mustn’t have those?”

The prime minister said there are persons who were saying that the red and orange zones should be declared disaster areas and reserved only for agriculture.

“You know, that just doesn’t make any sense for several reasons…” he said.