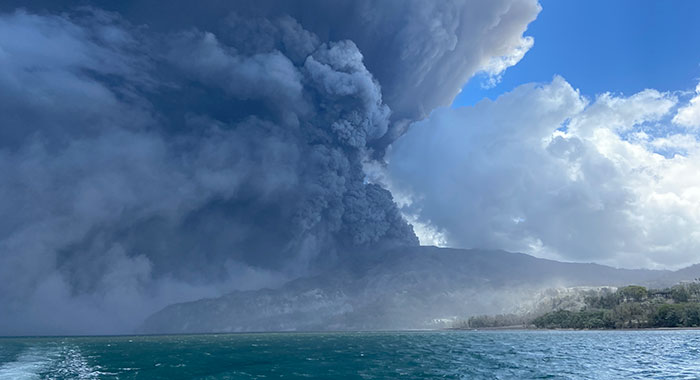 Linking geothermal energy exploration to the eruption of La Soufriere is like expecting a skin-deep injection to puncture one’s heart.

This was the analogy geologist Professor Richard Robertson used, on Friday, to address the question of whether the drilling on the slopes of La Soufriere last year could have resulted in the ongoing eruption.

In 2019, the government dug three wells on the slopes of the La Soufriere volcano as part of the geothermal energy project, but each failed to produce the required permeability.

The wells registered a temperature of 250 degrees Celsius, but the rocks did not have the level of porosity that would allow for converting that heat into electricity.

Then, in December 2020, after almost 42 years of inactivity, La Soufriere began erupting effusively, then exploded on April 9 – an eruption that continues to date.

In one of his daily updates on the state-owned NBC Radio last week, Robertson was asked if there is any link between the geothermal drilling and the eruption of the volcano.

“It’s amazing how much that comes up and how much both myself and my colleagues in Seismic have addressed it,” he said.

“I think even before the Soufriere was active we were being asked about it and I have made the analogy that the geothermal, I look at it in the context of the human body and the source for the volcanism is like deep beneath the surface of your body, sort of your heart, right inside the core of your structure while the way in which you were tapping into geothermal is really tapping into the hot rocks that is heating fluids that is above that.

Robertson said that the point is that the geothermal activity “was trying to get at circulating fluids at very shallow depths, compared to where the magma is coming from.”

He said that “the thing” that is driving the eruption is at least 10 kilometres (6 miles) beneath the surface of the earth.

The geologist said that the magma would have heated the surrounding rock and that heated rock would then have heated circulating fluids.

He said that accessing those hot rocks does not affect what is happening in the magma chamber.

“Geothermal has been successfully applied in areas that have on-going volcanic eruptions,” he said, naming Iceland as an example.

The professor, however, said he understood “why people think that, because it makes sense in the — you have a volcano, you drill into it then it explodes, then it must be connected.

“But, there are lots of things that happen together that are coincidental and not causative. It’s like saying the volcano erupts on a particular day in the year. The fact that it happens — if the volcano has been erupting on the 13th of April or the last 100 years, that doesn’t mean that it’s because of something. It is just coincidental.

“You have to prove that, and in the case of geothermal, both at this volcano and other volcanoes, there is no indication scientifically that they should affect each other in terms of getting a volcano going.  And certainly, in this case, we don’t think it did. I don’t know if that puts it to rest. I suggest I would keep on getting that question.  And that’s fine,” Robertson said.

Three of the last five eruptions of La Soufriere have occurred in April.

11 replies on “No link between geothermal drilling, eruption — geologist”