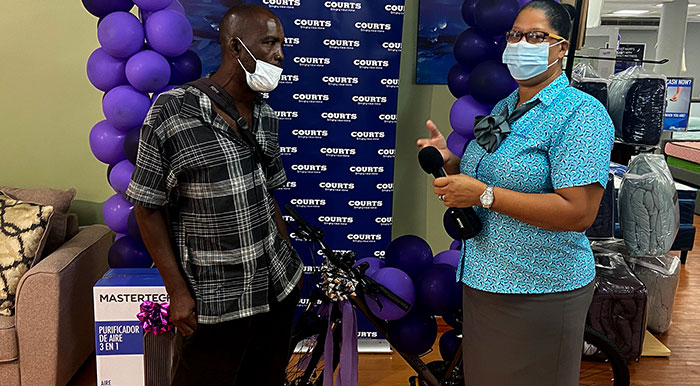 Marcus Young, the Mt Bentick, Georgetown resident who iWitness News met crying on his way to the police station on April 10, amidst the eruption of La Soufriere, is smiling again.

When iWitness News met Young walking among the ashes, he told us that he had hire-purchased a bicycle from Courts, a department store in Kingstown, and someone had stolen it after the volcano erupted the previous day.

After we published a report that included that man’s story, several persons, including Courts, contacted us, wanting to help Young to replace his bicycle.

With the help of iWitness News, Courts was able to locate Young, and, on Tuesday, the company presented him with new bicycle and told him that his bill for the stolen one was also erased.

The company also presented Kenton Chance of iWitness News with an air purifier for his efforts in locating Young.

Courts noted that the journalist has been travelling all over the country, amidst the volcanic ash, in his effort to keep the nation informed.