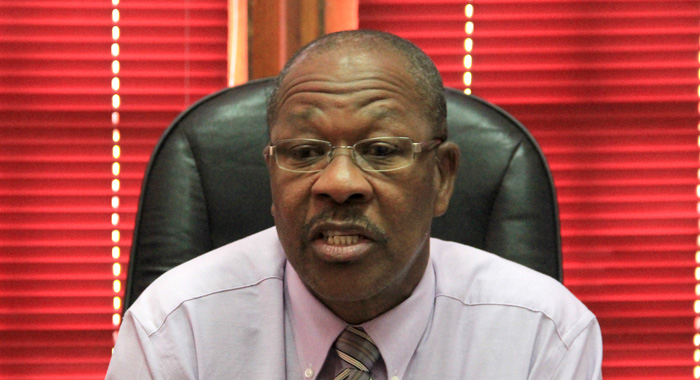 Chief executive officer of electricity company, VINLEC, Thornley Myers, has defended the integrity of the company and its staff, amidst complaints by customers about unusually high electricity bills in April.

He told a press conference on Friday, that because of the explosive eruption of La Soufriere, some customers received estimated bills and others were billed for more days than the usual billing period.

Myers, however, said that once electricity meters are actually read, customers’ accounts will be regularised.

“What you are guaranteed is that when the metre is actually read, your consumption is noted and you receive an accurate bill. I want to make that absolutely clear. In this company, there is no desire, there is no wish, there is no expectation by any of us that we should do that which is not right,” Myers told the media.

“And our customers should not be fearful, be concerned that as an entity, we are involved in unsavoury practices. That has not been the history, the tradition of this company. This unfortunate period that we are going through here has forced us into a position where we have to estimate a significant number of our customers.”

Myers said that VINLEC has about 46,000 customers across the country and monthly, nine meter readers provide meter readings for billing.

In normal circumstances, this is a fairly tight-schedule that begins on the first day of the month and ends two to three days before the end of the month.

Meter reading began on April 1, but was interrupted by the Easter holiday of April 2 to 5.

“No sooner had we recommenced, of course, we had the explosive eruption of the volcano on the 9th,” Myers said, adding that the week immediately following the initial eruption was difficult for everyone.

“Our meter readers, essentially, travel by foot, to every single meter and it became extremely difficult for them to traverse the country doing meter readings.”

He said that the eruption resulted in significant delay in the reading of meters, which eventually had to be halted.

When the meter readings recommenced, the company tried to read as many  meters as possible, Myers said.

He said that during this period, there were meters that were due to be read, as the company bills its customers every 30 to 33 days.

Myers said that the delay resulted in about 15,000 customers receiving a bill for a period of 34 to 43 days.

He said that customers who received a bill for approximately 40 days will receive one for 20 to 22 days in the next billing cycle.

However, notwithstanding the company’s aggressive meter reading after the initial eruption of the volcano, it ran out of time, and had to estimate consumption for about 6,000 customers.

This estimate was based on the average daily consumption for the previous three months.

Myers said that the issues with reading meters are compounded by the fact that, in April, the fuel surcharge was a little higher than the previous month.

“We want to assure our customers that this is nothing unusual in the electricity business and there are many utilities in our region that do not do a meter reading every month but they provide their customers with a bill every month. Some do it every other month; some do it quarterly,” he said.

Myers said that for April, 20,000 customers will receive a bill with a billing period of 32 days or less — a normal billing period.

Myers said that VINLEC is owned by the people of St. Vincent and the Grenadines and is managed by Vincentians.

“There is no interest, whatsoever, on the part of any individuals in this company to do anything to hurt our citizens. This is our country; this is our home. We won’t always get it right – that is for sure but it is not within our interest to do something that hurts, that pressures, that makes lives difficult for our citizens; it is not.

“Please accept, in this case, we are reaching out to you; please accept what we are saying has happened here, and we hope that you would understand it and we can essentially move forward as a company. We all have to protect our company. We know we are in difficult times, but there are certain realities that we have to face.”