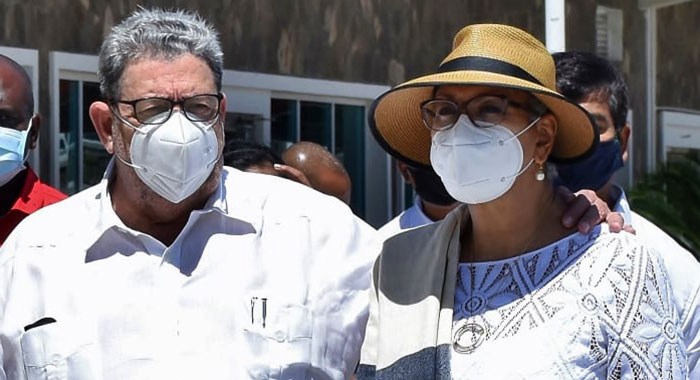 Prime Minister Ralph Gonsalves says there are “tensions in my loyalties” as his wife recovers from spinal surgery and the nation confronts the coronavirus pandemic and the eruption of La Soufriere volcano.

In March, the prime minister’s wife, Eloise Gonsalves, travelled to the United States for spinal surgery to remove what the prime minister had described in September as a “potentially debilitating” cyst that could have left her in a wheelchair.

At the same time in September, the prime minister said that his eldest son, Adam, who lives in the United States, had been diagnosed with “a debilitating cancer”.

The prime minister has made no further public comments on his son’s illness even as he spoke about him again last Friday.

“When a doctor tells us six to eight weeks, we take eight weeks because I don’t want to chinks on it and she is recuperating,” he said.

“She had a very serious operation to remove the cyst on her spine, because this is a neurological issue,” the prime minister said and thanked God that the procedure went well.

“… she is recovering, she is recuperating; there are some challenges. And I am very glad that Lance asked about it,” he said, referring to the caller, adding that he has not spoken about his wife’s condition since her return from the United States.

“I don’t have to give a report, but when people tell me and I say, ‘No. No. You can’t be serious.’ That some people posted, ‘Well he is going all about … I ain’t see he wife. I ain’t see he family.’

“And specifically they harp on they don’t see Eloise. Somebody is recuperating from a neurological operation, even going into the Red Zone is a risk, even driving in the vehicle could be problematic, they have to be careful,” the prime minister said.

“And I mean I don’t talk about these things you know, but because I have a laser-like focus, I don’t bother with the nonsense what people will come and talk with. But I am glad that Lance — but since he asked me to talk about Eloise, but she’s alright.”

The prime minister, however, said that his wife might have to travel to Cuba for further medical attention.

He said that Vincentian physiotherapist, Denis Byam, has, historically, been the one who performs physiotherapy on him or his wife.

Gonsalves, however, said that Byam is pursuing his doctorate in Cuba and is in and out of St. Vincent and the Grenadines with the West Indies team.

“And she has to get somebody she can feel good about at that level to do all what is required to be done in accordance with the medical instructions,” the prime minister said of his wife.

“How do I resolve these tensions in my loyalties? But nobody knows about these things because I am a human being like everybody else and I have my own travails. So I am not asking sympathy, you know. I am not even asking for understanding. Just stop the foolish kinda talk. And I don’t respond to rubbish. That’s my approach now,” the prime minister said.

He said that people were saying that he had sent his children away “since the volcano start”.

La Soufriere began erupting effusively in late December, and exploded on April 9, with scientists yet to give an all-clear, saying that the explosions could resume.

The prime minister noted that his older daughter, Isis, 30, is a member of the SVG team at the United Nations Security Council.

“Soleil is at the University in Trinidad, Trinidad is locked down,” the prime minister said of his younger daughter.

“When last Christmas I was asked if I would ask Prime Minister Rowley [of Trinidad and Tobago] if they could give an exemption for Soleil because she had been out for a year to come home, I said I am not asking anybody for any favour for my daughter or for my son.

“I said, let her stay in Trinidad, though I asked and Angie could tell you this by my office, send names for people to come out,” he said, referring to Permanent Secretary in the Office of the Prime Minister, Angie Jackson.

“My other son, Adam — because people know about Storm and Camillo — Adam has been living in the United States, his family is there, he is 40 years old, he’s a professional, he has his own business, he is into sound engineering, in which he did a master’s degree. That’s where he lives in Portland, Oregon.”

Gonsalves noted that his other sons, Camillo Gonsalves, MP for East St. George and Minister of Finance, as well as his youngest son, Storm live in SVG.

“Some of them who talking, when I issued the order for evacuation, Storm took his twin cab pickup, personally drove it into Fancy and was taking people out that evening. And he has been helping, volunteering with relief effort here and there. I guess you are in the politics, this thing happen,” the prime minister said.

“And if I may take the opportunity now to say you have some people who just want to be on Storm case. Storm is an entrepreneur from the time he’s a youth. Isis is perfectly qualified; she gets a job like a number of other qualified persons.

“Camillo elected by the people, but of course, all that, as far as they are concerned, the critics, the crazies, and others, that’s nepotism, you know. Apparently, it’s nepotism to be intelligent and to be committed and to work with people and people elect you.

“Storm has decided he ain’t asking nobody for no work, he trying to work with heself, he is an entrepreneur, he ain’t going to government for no work. But when he does anything, that becomes subject to criticism. What you want him do, go away from the land of his birth?” the prime minister said.

An April 28  “euronews” article described Storm as “the property mogul behind the One Bequia project”.

“The One Bequia development, where 39 luxury villas are set to be built, will be the first of its kind in the Caribbean to accept Bitcoin as payment for the properties,” the article said.

“Located in Spring, Bequia, One Bequia, will offer 40 modern, fully automated villas ranging from 2-5 bedrooms. The center of the One Bequia community will be The Cliff Clubhouse which will feature a restaurant (sic), two bars, a spa, a gym, a private cinema and a community pool along with a handful of high end shops.”