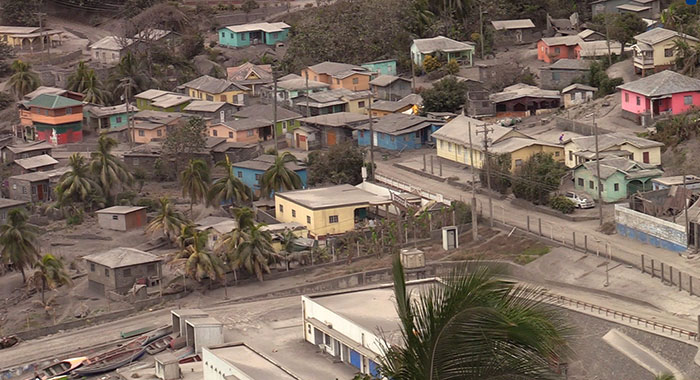 The roofs of several buildings in Owia collapsed after the volcano spewed more than one foot of ash on the Red Zone community. (iWN Photo)

The time has come for St. Vincent and the Grenadines to pay closer attention to the construction of homes in the volcano Red Zone.

This was the suggestion by Geologist Richard Robertson, one of the scientists who have been monitoring La Soufriere since it began erupting last December.

Robertson, noting that he was speaking in a personal capacity on NBC Radio last Friday, gave his views on the approach that should be taken to construction and living in the Red Zone.

His comments came as Prime Minister Ralph Gonsalves noted on the same radio programme, that many poorer persons build their home  “vai-ki-vai, with family labour and friends on the weekend.

“The lady in the family go cook pelau or boileen and men fortify themselves with some spirit from Mt Bentick,” the prime minister said, referring to strong rum.

It is believed to have been derived from the French Creole “vai ki vai” or French “vaille que vaille”, meaning “for better or worse”.

“Yes. Yes. The only troubling factor there is the way the houses are built in conformity to what is required in terms of the legislation.”

The minister apparently meant that the issue was whether the homes were being built in conformity with the relevant legislation.

“The mantra ‘building back stronger’, all those things have to be — we know we have to be addressing them but we have to address them even more sharply.”

Gonsalves said that people have to understand that when the Physical Planning Department orders them to stop building in a particular area or in the manner that they are building, “they are not trying to keep down a small man; they are trying to help the small man.

“Because in this period of volcanic activity and climate change generally, it is in your interest to build in a manner which is sustainable. Of course, the small man says ‘Well, Gomery, you gotta help me.’ And all that is part of the challenge which we have,” the prime minister said, referring to his deputy by his nicknames.

Speaking on the issue, Robertson said that his comments were in the context that he was no longer lead of the team from the University of the West Indies Seismic Research Centre that was monitoring the volcano.

“… so I am providing some perspective from a scientific perspective on the issue that you have on-going sort of in a broader context,” said Robertson, a Vincentian who has been living and working in Trinidad for years.

He said that he believes that St. Vincent is going to have, for some time, an on-going problem of lahars (a violent type of mudflow or debris flow comprised of a slurry of pyroclastic material, rocky debris and water).

“So, therefore, there are various ways that you can deal with that,” he said, adding that he disagrees with the view that there should be a lahar early warning system.

“Instead, I think what you need to look at is that you have a volcano in which people would want to live, and I understand why, but what has happened, as you just identified, is that people have put settlement and have put themselves in harm’s way by building structures in the valleys.”

He said that while people might have gotten away with this in the past, because there was not much flooding and water passing through those areas, this has changed because of the explosive eruption of La Soufriere.

The geologist said that given what the volcano has done, there will be, for the foreseeable future, lahars whenever it rains or even when it does not rain.

“… what we see from our field observation, this volcano has a way in which it could store water and get the water down the valley without you having too much rain,” he said.

“So if you live there and you put your stuff there, it means that you are going to have to build it back.”

He said that in St. Vincent and the Grenadines, as in the region, generally, the principle, “especially for the poor person who is struggling is that our insurance is actually the government.

“So, what those persons would expect, if they are not sort of coerced in some way not to do that is that when their structures fail and break up, they will come to the government.

“So I will suggest that it is important that the government agencies and the Planning people and whatever it is will stop people from putting themselves in harm’s way, need to be very forceful in ensuring that that doesn’t happen, especially going forward in St. Vincent, because you are going to have that problem.”

Robertson suggested that SVG pre-position assets such as tractors in strategic areas to clear access to communities after mudflows, as is the case in Montserrat.

He further said that before the eruption there was a volcano-ready project, funded by the Caribbean Development Bank, under which communities were made “more volcano-ready”.

“I think you need something like that for lahars,” he said, adding that this is particularly important for communities north of the Rabacca Dry River.

He said such a programme would help communities to better understand the dangers that lahars present.

“That might solve the problem of people building in these areas, because if people understand more that is going to happen, if you are struggling and you are building a house that you can’t really build any other way, you wouldn’t want to put it in some place where you know in the next rainy season it is going to get mashed up. You would want to find a different place to put it,” Robertson said.

“Lahar-ready would make people more aware; it would probably give them the means that they can dig themselves out a little, which is sort of what the project, Volcano Ready did. But this will focus on lahars.”

He suggested to the prime minister that his ideas be considered.

“And I am saying this just as a scientist looking at the situation, rather than from seismic, or from the team. I am making it clear. This is Richard Robertson giving you some advice,” he said.

Meanwhile, seismologist Roderick Stewart, who was also on the programme, said that Montserrat has been living with lahars for more than a decade.

“There is one community; they know they will get cut off for at least a day if there is a serious lahar. So people in the community always have preparedness. They have food and water; they have power generators, stuff like that … so that they can get through that one day once they are cut off. Similarly, we have the bulldozers; the excavators are positioned next to the major crossings and they can get them open within a few hours sometimes.”