PM’s explanation of his comment is ‘utter rubbish’ — lawyer 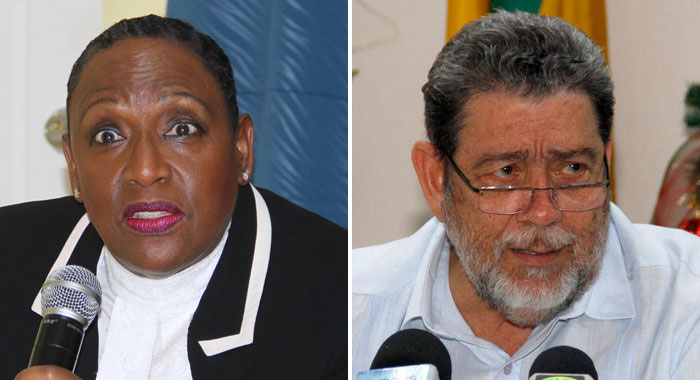 Lawyer Kay Bacchus-Baptiste says Prime Minister Ralph Gonsalves presumption of what the opposition would have said were its members involved in the April 13 shooting in Diamond amounts to a defence of the alleged offenders.

She said on NICE Radio on Monday that his subsequent attempts to present it as anything else is “utter rubbish”.

Ashelle Morgan, a lawyer and senator for Gonsalves Unity Labour Party and Assistant Director of Public Prosecution, Karin Nelson, are “persons of interest” in the shooting of Cornelius John, 60, at his home Commissioner of Police, Colin John told iWitness News last week.

The shooting victim told iWitness News that he was shot after three persons — two unknown men, and a woman he recognised as a resident of the village — went to his house last week.

The businessman said that one of the two men shot him in his left foot, breaking the bone in the process.

He said that before the shooting, he had told the woman to leave his wife – who lives in a house across the street from him – alone because she was preventing his wife from assisting him in his business.

Commenting on the issue last week, the prime minister said that if it were New Democratic Party members involved, the party would have said that the shooter was acting in defence of women.

“‘So what you expect? There are two women. In this country, there is a lot of violence against women and it is good thing to see somebody is standing up to defend women’,” the prime minister said the NDP would have said.

“But, now, it becomes all kinds of pejorative words being used to describe somebody. Just wait. You notice how careful I am? I am not pronouncing on something which is under investigation and I would be irresponsible to do so in a circumstance like this,” the prime minister said.

A number of media outlets, as well as members of the public and commenters had interpreted the prime minister’s comment as a defence of the alleged shooters.

Gonsalves, however, maintained that this was not the case and that he was merely commenting on what the opposition would have said, “if the shoe were on the other foot”.

Speaking on NICE Radio on Monday, Bacchus-Baptiste, who is the injured man’s lawyer, said:

“Coming back to the issue of the prime minister, for him to say that you must divorce completely — because that is what he is implying — his comments about two women and defending women and violence against women, divorce it completely, it has nothing to do with what he wants the public to hear about Ashelle Morgan and just restrict it to the possibility that what he was saying was merely surmising what, in his mind, the NDP will say, is utter rubbish. And I don’t know if any right-thinking organisation can retract what most Vincentians think simply because the prime minister writes them a letter.”

On Saturday, the prime minister sent iWitness News a letter via WhatsApp, saying that the publication has “an obligation to make a factual correction” to a commentary by Jomo Thomas, a lawyer and journalist.

The commentary was published on iWitness News at 07:49 a.m. on Friday and had been published sometime earlier by The Vincentian newspaper and on Monday by Asbert News Network.

Gonsalves copied to Thomas, Cyp Neehall, editor of The Vincentian, Clare Keizer, editor of Searchlight Newspaper, and Ernesto Cooke, the letter to iWitness News, saying that iWitness News, unlike the other publications, has punctuated his comments appropriately.

“I will wait to see if the Vincentian will [retract what most Vincentians think simply because the prime minister writes them a letter], or Kenton Chance.

“He seems to imply that the Searchlight has already done that. So the Searchlight don’t have a mind of its own? But that is the sad thing about where our community is right now. Everything is going down the political line.

“So because he writes a letter like that, he intimated that the Searchlight retracted and he is also intimating in the letter, rightfully or wrongfully, I do not know, Kenton would clear that up, that Kenton agreed with him and Kenton was saying that he did not think he was saying anything that was untoward,” Bacchus-Baptiste said, referring to allegations that the prime minister made in his letter.

“I will say it again and again, the prime minister overstepped his boundaries and even in the letter that he is writing, I do not think that because he said he was not being prejudicial and he said nothing prejudicial you must just accept it because that entire interview was prejudicial.”

In fact, I, myself, was lamenting the NDP because they took very long to comment on the matter. So how unfair it is for him to be telling the nation that if the shoe was on the other foot what NDP would do.

“We are not the ones who made it political,” said Bacchus-Baptiste, a former NDP senator and candidate for the party in the November 2020 general elections.

“And that is what the commissioner of police is echoing, that it is only persons with political interest — and when he said political interest, he is clearly referring to interest against his government — are making comments, he is doing and saying the same thing that Ralph is doing on the radio: divide and rule.”

The lawyer said that in her almost 30 years at the Bar, she had ever seen “a case like this where someone was shot, was taken to the hospital, named his attackers, identified his attackers sufficiently that you could find them and not a single arrest has been done or forthcoming as far as we know, not even a detention, we don’t know if a statement was taken in the proper way, a caution statement, I assume it was not because they asked for a caution statement from my client and not from the perpetrators.

“I have never seen this happen. I think this is the worst case of abuse and misuse and poor administration of justice that I have seen.”

She said there are comparable cases where people were charged and the DPP later discontinued the charges.

“… but it seems as though this one don’t even want to get to that stage. And as a lawyer … I am very disappointed… I am saddened that the Bar Association, whatever it is, has said nothing at all; there is no message coming from the Bar.

“It is just a disgrace in St. Vincent. And I am hoping, because unless the people themselves defend their right, then this will continue,” Bacchus-Baptiste said.

She said that when she first heard of the case she dismissed it and did not believe it “because it was so far-fetched.

“Especially knowing the individual from the DPP’s office, it was completely far-fetched … So I dismissed it until I got actual allegations from the victim himself.”