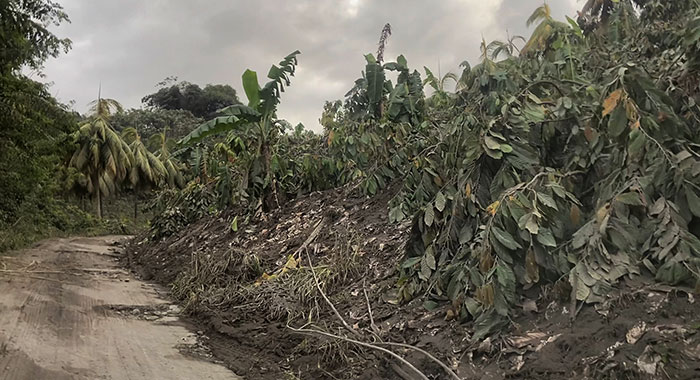 The eruption has caused significant damage to agriculture in St. Vincent. (iWN photo)

Farmers, as well as other people, employed in the volcano Red Zone will get income support of either EC$500 or EC$400 per month for the rest of the year to help cope with loss of income as a result of the eruption of La Soufriere.

“Many of these individuals face lengthy periods of reduced or non-existent income before they can restore their earning capacity, or their ability to independently support their families,” Minister of Finance Camillo Gonsalves told parliament on Tuesday.

He said that a banana farmer could take up to a year before reaping his first bunch, while root crop farmers might have to wait six to seven months.

“So there are people who are deeply affected not only now, but will be affected for months to come,” the finance minister said as he presented an EC$117.9 million supplementary budget.

The fiscal package contains EC$18.8 million in income support for over 14,000 Vincentians across this country.

“As such, income support represents 16% of this total supplementary budget. Almost 75% of that income support will go to farmers and fishers, undoubtedly, the sector most significantly affected in the post eruption economy,” Gonsalves said.

He said that farmers in the Red and Orange zone will receive EC$500 per month in income support from June to December this year, at a cost of $10.5 million.

Farmers south of the orange zone were also significantly affected by ash fall and disrupted markets, while fishers were unable to effectively ply their trade due to the turbidity of coastal waters, the minister said.

The minister noted that farmers were not the only workers whose earning ability was adversely affected by the volcano.

“Non-farmers in the Red and Orange zone, from the shopkeepers to the block makers to the restaurateurs, beauticians, labourers will all have a difficult period of adjustment once they return to their homes…”

Gonsalves said that MP for North Windward, Montgomery Daniel, made this point very passionately during the budget preparation.

“… because in his experience in ‘79, the hardest part was not while you were in the shelter, but when you got back home, and the economy still wasn’t ready to receive you, and you couldn’t find yourself gainfully employed,” Gonsalves said.

“So this supplementary budget will provide workers from the Red and Orange zones with income support of $400 a month for the first three months after they return to their homes. A total of $4.5 million will go to these non-farming workers in the red and orange zone.”

He said that even when double dipping is taken into account, close to 19,000 Vincentians will receive some form of income support next month.