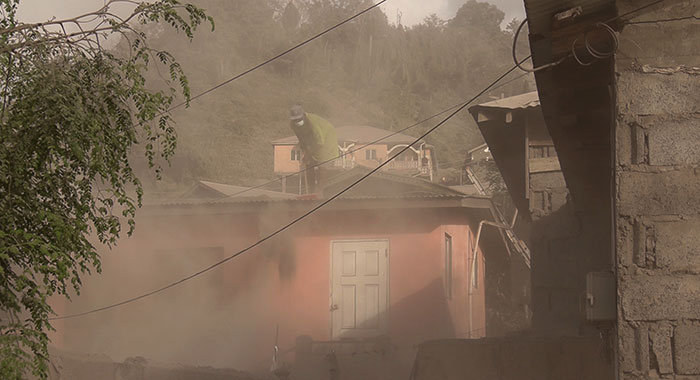 A man cleans volcano ash from a house roof in Fitz Hughes last month. The opposition is asking for a more assistance over a longer period for those affected. (iWN photo)

Opposition lawmakers support the fiscal package that Parliament passed in their absence on Tuesday.

The opposition had planned to support the measures and to “ask for more and there need to be more and the prime minister has said this morning that he recognises that as well,” Opposition Leader Godwin Friday told the media on Tuesday.

He spoke to the media shortly after he was evicted from parliament, and opposition lawmakers left in support of him, over his efforts to have Senator Ashelle Morgan barred from Parliament until a criminal investigation in which she is a person of interest is completed.

“The issues that were raised on the supplementary estimates are important matters but those matters are going to go ahead no matter what,” Friday said.

Regarding the EC$117.9 million fiscal package, he said there needs to be compensation for people who have lost their animals and their property.

“What they are talking about is about giving you implements so that you can start over. But what about if you had 10 sheep and you lose them? That’s a big loss for you,” Friday said.

“There are other things that can be done as well, the payments that are being made. Those are temporary and very small. This is something that we are going to be doing for a very long time.

“But the point of the matter is that this was something we were prepared here to debate and the fact that they were prepared to take this right up to the limit, tells you that they don’t want to have a debate on this either,” he said.