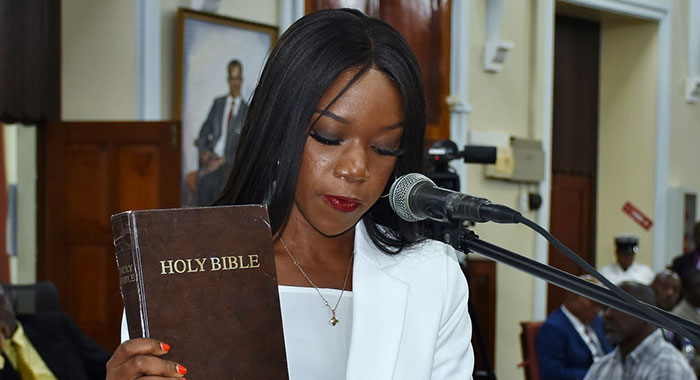 President of the Public Service Union (PSU), Elroy Boucher, was among protesters outside Parliament, on Tuesday, and the union issued a statement calling for Senator Ashelle Morgan, like Assistant Director of Public Prosecution, Karim Nelson, to demit office until the criminal investigation in which they are persons of interest is concluded.

“It is important that all people, organisation, the ordinary man stand in defence of democracy,” Boucher told iWitness News at the protest in Kingstown.

Boucher held a placard that read, “WE NEED EQUAL RIGHTS AND JUSTICE NO ONE IS ABOVE THE LAW”.

“What has happened with those allegations against Ashelle Morgan and Karim Nelson, they are very serious and speak to the rule of law — whether the law is applied equally to all persons or some persons are above the law.”

He questioned why no one has been arrested or charged in connection with the April 13 shooting of Cornelius John, 60, at his home in Diamond.

John told iWitness News that he was shot by the taller of two men, who entered his property uninvited and that they were in the company of a woman who he recognised.

He said that the woman threatened to shoot him in the mouth if he calls her name again, adding that he recognised the woman, notwithstanding her COVID-19 mask, as she grew up in the community.

“Desron, the Lavaman, he was arrested for a non-violent act that has not impact on anybody else’ life,” he said of the man who was detained after he climbed La Soufriere volcano days after it erupted explosively.

“But here we have, based on the allegation, a person who was shot, left to bleed, beaten up, but yet, no one has been charged,  no one has been arrested. That’s very serious in St. Vincent and the Grenadines and we all should really stand against that,” Boucher told iWitness News.

On Tuesday, the PSU said it felt compelled to make a statement on the allegation surround the two public officials “on the basis that we strive for fairness and justice not only in the labour market, but also in our society at large.

“We want to see the tenets of democracy, such as transparency, accountability and rule of law at work,” the union said, adding that the allegation against Morgan and Nelson “are very serious”.

“As it stands, public confidence in the legal system is shaken. Therefore, we want to see nothing but a proper and just investigation conducted. Public interest and public security demands that due process of the law is adhered to with respect to all parties involved in this incident.

“Further, we say that posts held by senior public officers are positions of highest accountability, and that respect to human dignity must be a guiding principle in the performance of professional duties and the conduct of interpersonal relations.

“We encourage the authorities to conduct the investigations in accordance with the law to ensure that justice is served. We also applaud Assistant DPP Nelson for taking voluntary leave until the investigations are conducted and completed. It is a right move on his part in the circumstances. Therefore, we call on Senator Morgan to do likewise,” the PSU said.

“We must not lose sight of the fact that we are a country of laws. The laws of the land must be applied without prejudice in all circumstances. We, therefore, hope that this matter will be resolved expeditiously and that the reputation of our country will remain intact regionally and internationally. We eagerly await the outcome of the investigation into all allegations involving all parties and anticipate that justice will prevail.”

The union’s statement came on a day that Opposition Leader Godwin Friday would be evicted from Parliament over his attempt to get House Speaker Rochelle Forde to bar Morgan from the chamber, pending the outcome of the investigation.

The other opposition members left in support of their leader, while Morgan was allowed to remain in the chamber.