PM was making an excuse for shooting — victim 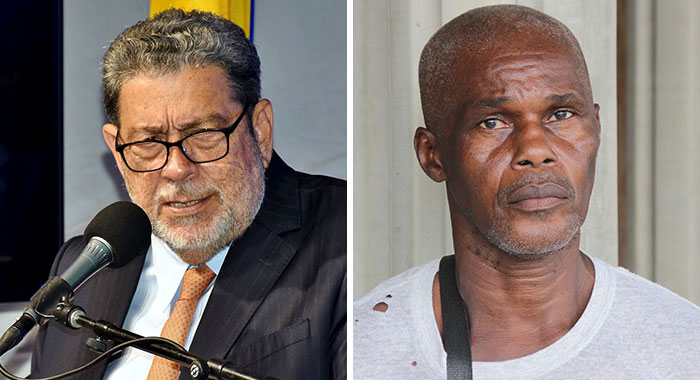 Cornelius John, 60, the man who was shot at his Diamond home on April 13, says that Prime Minister Ralph Gonsalves’ comment about what the opposition might have said had one of their members been involved is nothing but an excuse for the shooting.

Ashelle Morgan, a senator for Gonsalves’ Unity Labour Party, as well as Assistant Director of Public Prosecution, Karim Nelson are “persons of interest” in the investigation, Commissioner of Police, Colin John has told iWitness News.

Three persons were present when John was shot at his home, after a verbal exchange with the trio, which he said came to his house uninvited.

Gonsalves has maintained that he was not making an excuse for the shooting when he commented on it on NBC Radio on May 4.

A number of media outlets and commentators, as well as members of the public concluded that Gonsalves was making an excuse for the shooting when he said:

“If the shoe were on the other foot and it was an NDP woman, an NDP parliamentarian or high party member who had gotten involved in this, you know how the story was going to spin?

“‘So what you expect? There are two women. In this country, there is a lot of violence against women and it is a good thing to see somebody is standing up to defend women.’”

The shooting victim, a long-time supporter of Gonsalves’ politics, told iWitness News, on Wednesday, that his conclusions were the same as those of many other persons.

“Yes, when he was trying to say woman defending — we should glad that woman come and defend woman because we have a lot of woman abused around the place,” the shooting victim told iWitness News.

“He was making an excuse but at the same time he making an excuse, he trying to get support from women to say, ‘Oh, it’s a good thing that women step up to support women –  when there was no abuse’,” John said.

He, however, said that when he was shot there was no cause for anyone to be defending a woman or anyone else.

The injured man, who makes concrete products and farms for a living, told iWitness News he feels “miserable” about the fact that the person who shot him might be the assistant Director of Public Prosecution.

“Seeing that people in such high authority, people who people in the nation look up to would stoop so low and do such stupidness (nonsense).”

He speculated about why the trio had come to his property.

“I’m saying to myself, if I, as a man, ask a woman to go somewhere with me to confront another woman, I figure she would say to me, ‘I am a woman, just like that woman. I am not going to do that.’

“It sounds rather strange to me that men who are supposed to be leaders in the nation become followers. It is really annoying to see people who you should be looking up to for sound leadership or good quality, stoop so low with no integrity at all, act foolish. Miserable! Especially when you are leading people in the nation. It comes as if we don’t have a nation again.”

John said that over the years, ‘at least from the time I come up, grow up as a child, I support the prime minister. He used to be Ralph Gonsalves at the time, since in the days coming up, as a youth man when they had Yulimo – ‘Upward’ was the word. You used to call it the Communist Party. I supported Ralph Gonsalves from that time up to this time.”

He said that during the last election he used his truck to transport people to and from ULP rallies “without collecting a dollar”.

“So politics is not really a thing about this right now,” John said.
He said he recognised one of the three persons who came to his house as ULP senator Ashelle Morgan.

John said that while Morgan was wearing a COVID-19 mask, he was able to recognise her from her physique, voice and gait, as he has known her since she was a child growing up in the community.

He further said that it was the taller of the two men who came to his property that shot him and after the shooting, Morgan threatened to shoot him in the mouth, if he calls her name again.

Asked about the fact that a ULP senator was allegedly present during the shooting and nothing has been done five weeks later, John told iWitness News:

“It feels a kind of disgraceful to see people who you really support and then they could come and do you this.

Actually, I supported the party before that lady — years before –because since I was around 18 years, the first time I voted, I voted for Yulimo,” he said, adding that Gonsalves, as well as Renrick Rose were candidates.

“That the first party I voted for. That’s when Cato was there [as prime minister]. So I supported them from then, to when they joined with the Labour Party. When the prime minister had the first rally over at Diamond when they were trying to whip up support against the NDP (New Democratic Party) when they brought the Trinidadians to build the homes over there, I was at the first rally all those years  supporting the party.

“So when these kinds of things happen this time, I really feel disgraceful. Even right now, I have probably the only signboard still in from my gate with Camillo Gonsalves stuck up in front there,” he said, noting that while the election campaign billboard is not on his property, it is very close to it.

“I feel disgraceful for the way I support them and people in the party; at least I don’t know where they come from, just come and do this kind of thing. So I say a party you support, looking to say we’re gonna take St. Vincent forward, we have a nation to build. It really shocked me because that is not my idea of building a nation,” John said.

20 replies on “PM was making an excuse for shooting — victim”