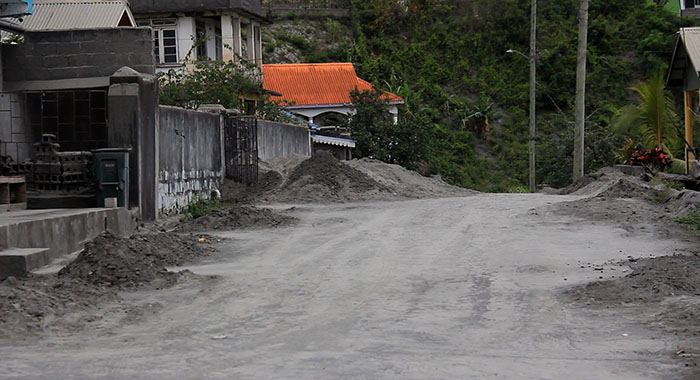 Heaps of volcanic ash along the roadside in the Orange Zone town of Chateaubelair on Monday. (iWN photo)

The initiative, which started on Tuesday morning, will see the employment of over 6,000 persons.

This will include 412 gangs and 1,952 jobbers, who will be responsible for the cutting of trees, and cleaning of roads in all 15 constituencies over the next seven days.

Contracts will also be given to over 100 truckers and conductors.

The programme is being done at an estimated cost of EC$3 million.

“BRAGSA is, therefore, appealing to motorists and pedestrian to take the necessary precautions during this period,” a press release said.

BRAGSA’s communications officer, Rohan Cupid said work will only be done in the Green, Yellow and Orange Zones.

He said that emphasis will be placed on the cleaning of the Orange Zone in anticipation of the return of residents to those communities.

BRAGSA will take step to ensure that the communities are clean and ready for their return, Cupid said, adding that the progamme will also focus on the cleaning of drains in light of the commencement of the hurricane season next month.

One reply on “6,000 people get jobs in BRAGSA’s road cleaning programme”