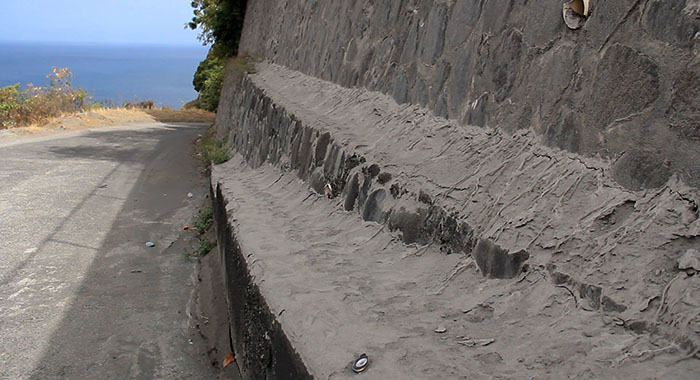 A large deposit of ash o a retaining wall near a house in Troumaca on Monday. (iWN photo)

A Troumaca resident, who has returned to the North Leeward village to clean her house, says that her efforts are frustrated by the large amount of volcanic ash in public places.

“I have no problem in coming back home. But, as you can see, look at the walls; look at the guys here cleaning the roads … The school hasn’t been cleaned as yet… I want you to be here to see when that wind blows and everything circulates, coming down by me,” the woman who asked not to be identified told iWitness News on Monday.

Two men were near her house using wheelbarrows, shovels, and brooms to clear ash from the road near the woman’s house.

However, the stone wall around the Troumaca Government School, located near the woman’s house, had large deposits of ash on it, as was the case with the street and the school compound.

She said that she had cleaned inside the house several times, but each time she came back from Layou, to where she had evacuated, she had to clean ash from the house again.

The villager noted that the National Emergency Management Organisation (NEMO) has said that residents of Orange Zone communities, except for Chateaubelair and Fitz Hughes could reoccupy their home.

“But this is not necessary to come back home right now,” the woman told iWitness News.

“The condition, it is not ready as yet. I want you to take the walls with the ash,” she told iWitness News, urging us to video record the walls on which there were significant deposits of volcanic ash.

“When the wind blows, everything coming into my house… Every time I clean and I come back, it is bare ash. I can’t live in here right now. The condition is not liveable.

“Look at the road. They said that they washed down certain parts. Look at it. Look. So I come now to get it cleaned up.”

She urged that government officials clean the public buildings in the area.

“The school hasn’t been cleaned as yet and when the wind blows, it is affecting me badly…

“I think if they are cleaning a village, you clean a village entirely and then you move on to another village.  It ain’t make any sense you come and clean piece here, clean piece there and you telling people to go back home. It can’t work. North Leeward needs a proper cleaning.”

Speaking to iWitness News on Tuesday, Michelle Forbes, head of NEMO, said that the issue of ash at the Troumaca Government School came up during a meeting of the National Emergency Council that day.

“For a reversal of any decision, we would have to make that recommendation to Cabinet,” Forbes said, adding that the EOC knows there are some areas that need some “extra cleaning”.

“You mention Troumaca, that’s one of the things that came up too. The Troumaca school, in particular, for you to clean the clinic, for example, the school has to be cleaned first, because that’s slightly above. So we are aware of the situation, BRAGSA is working in all of these communities — from community to community to continue the clean up, so the clean up is ongoing,” Forbes told iWitness News.