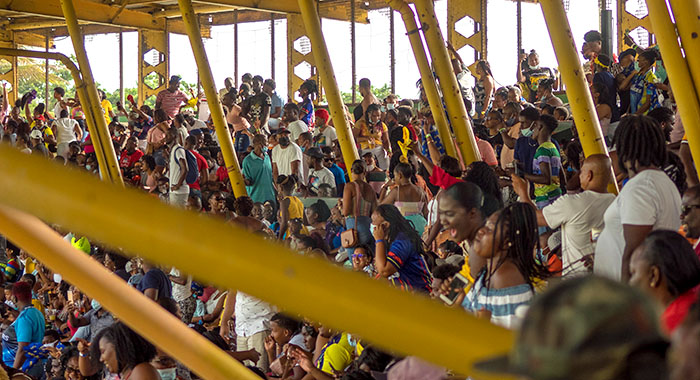 A section of the crowd at the cricket event on Sunday, where many fans wore their masks incorrectly or ditched them altogether.

Hundreds — if not thousands — of persons, many of them not wearing face masks, or wearing them incorrectly and ignoring physical distancing guidelines, attended the finals of the Vincy Premier League cricket competition on Sunday.

The event laid bare the inconsistency of the government of St. Vincent and the Grenadines regarding the enforcement of COVID-19 protocols.

The event at Arnos Vale Sports Complex shocked social media when photos began emerging of fans sitting close to each other, shouting in excitement, many of them not wearing face masks.

It took place two days after acting Prime Minister Montgomery Daniel said that the government would be enforcing the COVID-19 protocols that “basically went out of the window” after the April 9 eruption of La Soufriere.

Daniel, speaking on Star FM on Friday, said that the Ministry of Health had made a presentation to the Cabinet the previous day calling for the enforcement of the protocols.

“And the observation by the Ministry of Health is that there is a continuous neglect of social distancing. People are just going out and having [a] nice time and commingling and bundling and wanting to enjoy themselves. And so, in terms of the mass gatherings, the protocols that [were] … established will be enforced.  There will be no indoor dining, no gathering in public places, on public transportation; the protocols would be maintained. And then you have, in terms of churches, they are still down to their capacity of one-third. In terms of parties and funerals and weddings, of course, they are expected to maintain the protocols as required.”

The minister said that a troubling development was the use of sound systems installed in vehicles to provide music at some venues.

He also said that Bottle and Glass, Barrouallie, is a trouble area, where “even some of the individuals who are supposed to be protecting the law are part and parcel of those gatherings”.

The acting prime minister said that the Cabinet had invited the police to the discussions to communicate its seriousness about enforcing the protocols.

“And that’s why I am saying to you that as of this weekend, the police is being asked to increase in terms of their methods of control; in terms of the reduction of COVID-19 so that whether it is amplified music or not, whether there are large gatherings that they cannot be less than the six feet as required by the protocols,” Daniel said in his comments, two days before the cricket match.

The Ministry of Health, in a post on its Facebook page on Saturday, announced a vaccination drive at the sports complex from 11 a.m. to 4 p.m. to coincide with the games.

A number of persons took to social media, on Sunday, to comment on the inconsistency in the enforcement of the COVID-19 protocols.

Wayne Murray, a medical doctor, said that the cricket game said “a lot about the Covid-19 management in SVG.

“It shows why people are not taking the vaccines as the government would like. You cannot tell fifteen persons that they cannot ride the bus, or thirty students they cannot sit in a class but a stadium of hundreds ‘jammin’ at a cricket game,” Murray wrote.

“The committee is but another posse used by the government and its partners at convenience. They would come next week and start to blame the lack of vaccine uptake for the spread of the virus.  IGNORANCE!”

Evan Clarke commented that had the church held a big meeting like the cricket match, “you all going to run down the church, the pastor and members and say look at what they doing”.

Cindy Carr Sam suggested that the situation occurred because Prime Minister Ralph Gonsalves is out of state.

The prime minister has accompanied his wife to Cuba, where she is receiving therapy after spinal surgery in the United States earlier this year.

“So because Ralph nah deh yah aryo ah do anything… let me call him or better wait till he come [back],” Carr Sam wrote.