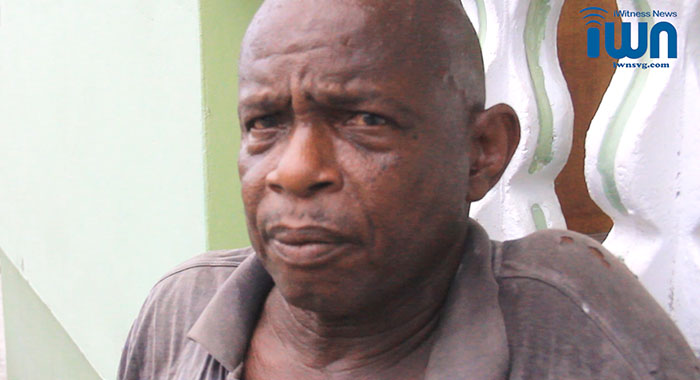 A Chateaubelair man who defied the order to evacuate ahead of last month’s explosive eruption of La Soufriere says he will not do so again, if the volcano erupts again in his lifetime.

The man, a retired driver, who gave his nickname as “Ninks” told iWitness News that on April 9, the morning that the volcano would erupt, he had gone to the Chateaubelair wharf to get some fish from his son.

“I saw a black puff of smoke. When I looked at the volcano, black smoke, blue, then white. I said, ‘Like Soufriere going to blow.’ So I moved out the same time saying I going on the hill,” Ninks told iWitness News on Monday.

“I met some guys on the bus shed and was telling them the way Soufriere looks, it looks like – the word was not out of my mouth, I heard, ‘Brakatak! Brakatak! Bloouw!’

“When I looked back, I did not see anyone under the bus shed. I don’t know where the earth took them in,” Ninks said, referring to the speed with which the men he was speaking to had left the area after the eruption.

He said he went on the hill the day after the eruption and the volcano began erupting again.

“Something told me to look out to sea. When I looked out to sea, I saw this blackness coming to the land. I could not go down the hill. I went to where the house was with my mask over my face and put my jersey over my face. I could not see anywhere until about three, four, five minutes the thing started to wear away.

“The Soufriere was still beating until in the night. I said, ‘Somewhere mashed up,’” Ninks said.

“Everybody who stayed, they were indoors and I was the only one on the street, because I wanted to experience it. And it gave me a good experience. Thank God I am still alive. It did not kill me.

The government is yet to give the all-clear for residents to return to Chateaubelair and Fitz Hughes, as there is still a large amount of ash on the streets there.

Recently, water was returned to the area, but Ninks told iWitness News that residents who defied the evacuation order, as well as those who have returned, do not have enough food.

“I will like the government to send some food for us.”

Ninks spoke to iWitness News as he and “Kalanji”, a farmer, was helping a homeowner to clean volcanic ash from the yard of a house.

Ninks said he was around 21 years old when La Soufriere erupted explosively in 1979 and he had evacuated to Barrouallie then.

Like this year, in 1979, volcanic ash fell in Barrouallie, but the 2021 eclipses the volume significantly, Ninks said.

In 1979, volcanic ash fell in Barrouallie where he went, but not as much as this round, Ninks said.

He told iWitness News that his late brother and another resident had decided to stay in Chateaubelair and this had influenced his decision to not evacuate.

“I said, ‘It did not kill them, I am staying to experience it.’”

But this experience has caused a change of heart.

“Me nah stop ah Chateaubelair. Serious! A couple fellas said they are not moving but I will have to move because I don’t know what will be the rebound next time,” he said.

He, however, said that if he lived in Rose Hall, Troumaca and other Orange Zone communities further south of the volcano, he would not evacuate.

“Next time, I am not staying here for what I experienced and saw. For what I saw coming out of that; ball of fire…”