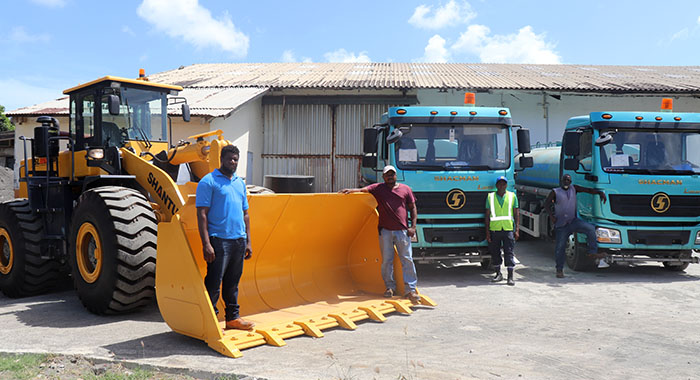 The Roads, Buildings and General Services Authority (BRAGSA) has received three new vehicles to assist with clean up efforts following the explosive eruption of the La Soufriere Volcano in April.

The Government of St. Vincent and the Grenadines purchased two water sprinkling trucks and wheel loader at a combined cost of over EC$500,000.

BRAGSA’s communications officer, Rohan Cupid said that the vehicles will be commissioned immediately to assist with clean up efforts in the Orange Zone.

He said that since the eruption, BRAGSA has been working relentlessly in the communities in an effort to restore some level of normality.

He said teams have been out cleaning and washing the roads from Fitz Hughes in North Leeward to Georgetown in North Windward, as well as removing volcanic ash from the communities.

Cupid said emphasis was also placed on the cleaning and power washing of public buildings such as schools, clinics and police stations.

He said now that the all-clear has been given for persons in the shelters to return to their communities in the Orange Zone, the work will intensify. Cupid said BRAGSA’S clean up efforts are ongoing, and he, therefore, asked people to exercise caution in their communities while the work is being done.