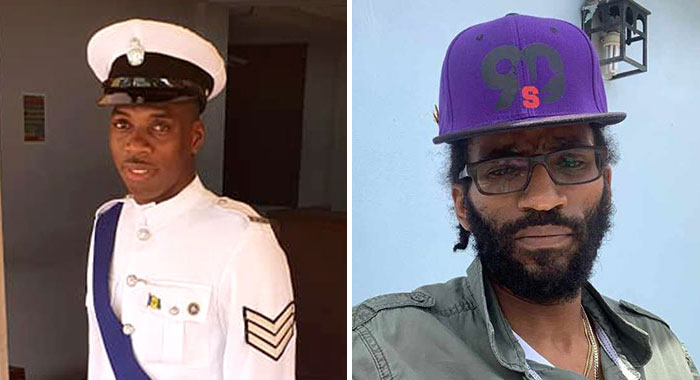 The parents of the man who police gunned down after he allegedly killed a cop on April 26, 2020 are complaining about an inquest not being held, even as the police say they refused to give the investigator a statement.

“It is not complete and the parents may have contributed to it not being complete,” Commissioner of Police Colin John told iWitness News, on Wednesday, when asked about the status of the investigation.

The revelation came one day after Mr. and Mrs. Glasley Lewis and their lawyer, Kay Bacchus-Baptiste, held a press conference in Kingstown, calling for the inquests.

Police have said that they shot and killed Gleason Lewis, 36, at his parents’ home in Campden Park after he shot and killed detective Sergeant Philbert Chambers, 30, and wounded Police Constable 700 Verrol Sam.

The officers were among a squad from the Questelles Police Station who had gone to Lewis’ home to execute a search warrant in respect of guns and ammunition, around 8:05 a.m. on April 26, 2020.

The law demands coroner’s inquests into both deaths but none have been held.

At their Tuesday press briefing, the Lewises questioned the police account of the events and suggested that Chambers died as a result of friendly fire, and that Gleason was killed to cover it up.

“We are here because there are a number of unanswered questions surrounding the death of our son. The powers that be promised that they would have a coroner’s inquest and up to this point we haven’t heard anything,” Mr. Lewis told the media.

“Today, it is one year, one month and six days and up to now we haven’t heard anything on the matter,” he said.

“What we are really asking for is due process because if my son killed the police, everybody should know or we should see the evidence that that was done. And, without the coroner’s inquest, we cannot have that,” he said.

Mr. Lewis said that both deaths are painful to him as he lost his son as well as one of his former students at the Barrouallie Secondary School.

“… so both of them were dear to me,” Lewis said, his voice breaking.

But speaking to iWitness News on Wednesday, the police chief said that after the death, the investigator made several attempts to record statements from the Lewises.

“They, for whatever reason, appeared to be evading the police from giving information. When the investigator eventually caught up with the father, I know for sure, the father indicated that he was advised by his lawyer, Kay Bacchus-Baptiste, not to give the police any statement,” John said.

He said he had spoken, on Wednesday, to the investigator who indicated that, to date, he had not received a written statement from Mr. Lewis.

John told iWitness News that the police could close the investigation without a statement from the Lewises.

“I am not saying that it cannot be closed but we are trying to make sure that we get as much information as possible to do the investigation as thoroughly as possible,” the police chief said.

He said that the file is in the custody of the investigator, who has indicated that in “the next couple of days” he will send what he has to the Office of the Commissioner of Police.

John said his office would then forward the file to the Office of the Director of Public Prosecution for review and instructions.

At the press briefing, Bacchus-Baptiste said she has been acting for the Lewises since the death of their son and has written to the prime minister, attorney general, and the chief magistrate to try to get a coroner’s inquest.

“… though they are blaming Gleason for  shooting the policeman, it seems as though, from my instructions, and from witnesses’ accounts, it was friendly fire, as they put it, that killed the policeman Chambers and the other policeman that was injured,” the lawyer said.

She said that in May 2020, she wrote to the police chief telling him that she is instructed that despite several inquiries, the police have not answered the Lewises’ “very salient questions” concerning their son’s shooting.

The couple requested a copy of the list of all items taken from their home and removed from the body of their son.

The lawyer told the police chief “all the evidence points to something being amiss.

She suggested that there be “a full, independent and transparent investigation.

“All concerned should be interviewed separately by a trained, independent investigation team.”

The police chief responded on May 18, 2020 acknowledging receipt of the letter, adding that it will be forwarded to the AG for his advice and opinion.

Bacchus-Baptiste told the media that on June 17, 2020, the commissioner of police had written to her saying that the investigation was still ongoing and that contact would be made upon completion.

“Well, today is the first of June [2021] and we haven’t heard anything. This is another investigation that is still ongoing,” the lawyer commented.

“They have not contacted me or the clients,” Bacchus-Baptiste said.

She said that the police chief had also indicated that the coroner’s inquest would be conducted in accordance with the Coroner’s Act.

He further said that as regards the request for compensation for damage to the Lewises’ property, he would be grateful, without admission of liability, for proof of ownership and estimate from a qualified assessor of the alleged damage.

Bacchus-Baptiste said that on June 22, the police chief promised to have a coroner’s inquest and none has been held.

The lawyer said the law says that the police should immediately transfer the information regarding an unnatural death to the magistrate.

If they do not do so, the magistrate has power to ask for the information.

The lawyer noted that according to the Coroner’s Act, it is the duty of the police or anyone who has any report of an unnatural death to report it to the coroner, who, under the law, is the magistrate.

“Because I heard nothing, I wrote the chief magistrate as the main coroner. I wrote her on July 20th, 2020.

The lawyer told the chief magistrate that Lewis’ parents had heard the pronouncements of the prime minister and the commissioner regarding a coroner’s inquest. But no notice of such notice was known.

“This is to request that you do hold an inquest into the death of Gleason Lewis urgently,” Bacchus-Baptiste wrote to the chief magistrate.

She further applied, under the act, for Lewis’ widow and parents to attend the inquest.

“Documents with regards to the within named Gleason Lewis are not before this court.”

The lawyer said she, therefore, wrote the prime minister on Sept. 3, copying it to the police chief, and enclosing the communication with the chief magistrate.

Bacchus-Baptiste requested that the prime minister direct that all the necessary documents be sent to the chief magistrate so that the inquest could be heard very urgently.

“I still have not had any response from them,” she said.

“Certainly, a year after cannot be good timing. And the fact that they have not said anything else since and there has been no further response to my letters, it is clear to me that this is going to be another case like the inquest with the so-called powder that they found when those people were shot up in Union Island.”

She was referring to the case in which police said they shot and killed, on a boat, three Venezuelans who had opened fire on a police officer.

Customs guard Othneil Whyte also drowned during that incident and a coroner’s inquest into the deaths was adjourned indefinitely and the Venezuelans implicated were repatriated.

“It looks as though it is going to be another case like that. Well, the parents are not satisfied because their son’s name is going down in history as though he shot and killed a policeman and injured another policeman.

“And from their knowledge, from the witnesses, from all the surrounding evidence that we have, it is clear that the police have misled the public about what happened on that day.”

One reply on “Investigation into April 2020 death of cop, alleged cop killer incomplete”