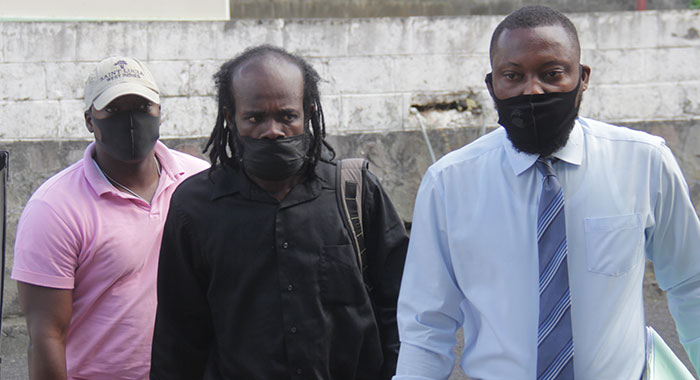 A Lauders man is expected to appear before the Serious Offences Court, in Kingstown, today, Wednesday, in connection with the killing of his brother one week earlier.

Bus conductor Timmy Williams, 38, appeared before the Kingstown Magistrate’s court yesterday, Tuesday, where a manslaughter charge was read to him.

He is charged that on last Thursday, May 27, at Lauders, he caused the death of Divey Larry Williams, of Lauders by an unlawful act.

Divey, a 36-year-old farmer and labourer, is Timmy’s brother.

Prosecutor Sergeant of Police Renrick Cato did not object to bail for the accused.

The prosecutor asked the court to demand sufficient surety, impose reporting conditions, order the accused to surrender his travel documents, issue stop notices for him, and adjourn and transfer the matter to the Serious Offences Court.

Senior Magistrate Rickie Burnett set bail at EC$20,000 with one surety and also granted the other elements of the prosecutor’s application.

He ordered Williams to report to the Biabou Police Station on Wednesdays between 8 a.m. and 8 p.m. and transferred the matter to the Serious Offences Court, where Chief Magistrate Rechanne Browne will set a date for a preliminary inquiry.

Detective Corporal of Police 191 David of the Criminal Investigation Department, Calliaqua is leading the investigation.

iWitness News understands that about 10 p.m. last week Wednesday, Timmy was at the home that he and his brother shared.

Divey reportedly came to the house and started arguing and pelting Timmy’s section of the house with stones.

Divey is further alleged to have chopped Timmy on the shoulder and right foot.

Timmy, in response, chopped Divey on the forehead and hands.

Timmy went to seek medical attention for his wounds, but none of the brothers reported the matter to the police.

A neighbor found Divey dead below the house around 5 p.m. Thursday and reported the death to the police.